Tripods predate photography by a long shot, but it only stands to reason that this sturdy three-legged apparatus became the accessory of choice in the earliest days of the medium and remains an essential tool in any serious photographer’s camera bag. Offering balance, support and convenience, it’s a perfect match that seemed predestined. They come in such a broad range of styles across a staggering spectrum of price points – from lightweight to heavy-duty, pared-down to fully loaded – picking the right one can be a bit daunting at first. Here are some of the key factors and features that enter the decision-making process.

It all starts with the camera you use and how you use it. Since video tripods can differ radically from those used in still photography, for the purposes of this article, we’ll focus on the latter. 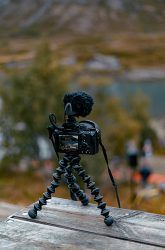 Example of a Tabletop Tripod

A tripod is especially indispensable for anyone shooting in low light, with slow shutter speeds and wide apertures, where even the slightest tremor results in a ruined photo. But if you’re just taking snapshots with a compact point-and-shoot and only need a bit of stability once in a while, you may require nothing more than an affordable little tabletop tripod that doubles as a hand grip when folded up (and conveniently fits in your pocket or purse).

It’s a different story for a nature or wildlife photographer whose equipment has to stand up to the elements while remaining portable, as it is for an astrophotographer with a heavier DSLR and bulkier lenses. Lightweight carbon-fibre construction has become an increasingly popular choice, but some photographers still prefer the sturdier – and often more affordable – original aluminum alternative. 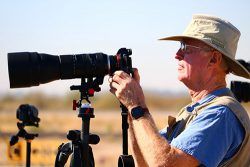 A tripod’s product description will list its payload capacity right upfront, which includes the weight of the camera and the lens attached to it. The legs’ capacity may differ from that of the head you’re using (more on that later), in which case you’d use the lesser figure: the legs may be able to bear more weight, but if the head isn’t up to the task, it cancels the other out.

Remember though that a given payload capacity isn’t necessarily the maximum weight your setup can handle – it can sometimes actually hold more than twice as much as stated – but rather the optimum amount to ensure uncompromised stability without your camera equipment creeping or sagging to one side the moment you let go of it.

Photographers will sometimes purchase a tripod without giving it much thought. And yet, after the acquisition of a camera and lenses, the tripod is arguably the most important – certainly the most used – piece of equipment in a photographer’s kit.

Tripods come in a vast array of heights and individual height requirements vary considerably, but a general rule of thumb states that the maximum height you need is dictated by the height of your eye level, minus that of your viewfinder and the tripod head. Clearly, you’re not going to make best use of a tripod that exceeds the height of your own eye or one that’s too short and forces you to crouch when looking through the viewfinder. 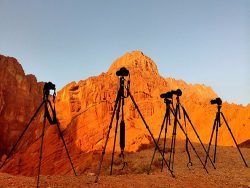 Fewer leg sections make a tripod more stable, while more sections make it more collapsible with a shorter closed length and more suitable for travel. In terms of performance, the difference between twist locks and flip lock is marginal, but when it comes to ergonomics, many prefer the convenience of twist vs. flip.

Although not a leg per se, a tripod’s centre column can provide multiple functions. It can easily be extended to get those hard-to-reach shots that exceed your height, but remember that the farther you lengthen it, the less stable your setup becomes.

By contrast, the centre column also offers additional stability – and even crucial vibration dampening in windy conditions – when used as a counterbalance simply by adding some weight to the bottom of it: look for one with a hook from which you can suspend something – even your camera bag – to provide some ballast. Some models even feature a detachable centre column that doubles as a monopod. 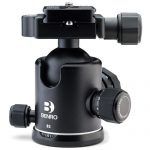 Example of a Ball Head

Ball head vs. pan and tilt

Apart from the legs, a tripod’s head is probably the most crucial feature, and even though most come with one already attached, you’re not limited to using it exclusively. The two most popular choices are ball heads and the pan-and-tilt variety.

A ball head is an ingenious little device that’s super-simple to deploy: lock it into position or loosen the grip to move it freely in any conceivable direction. 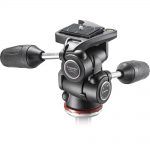 Example of a Pan and tilt head

A pan and tilt gives you the additional flexibility to fix one axis while swivelling another, but some find all those handles and knobs cumbersome compared with a ball head’s streamlined form factor and ease of use, not to mention bulkier to transport when travelling.

It’s a personal choice, determined by your preferred shooting style, but you might ultimately decide on having both to equip yourself to better meet the needs of various situations. Two heads, after all, are often better than one.