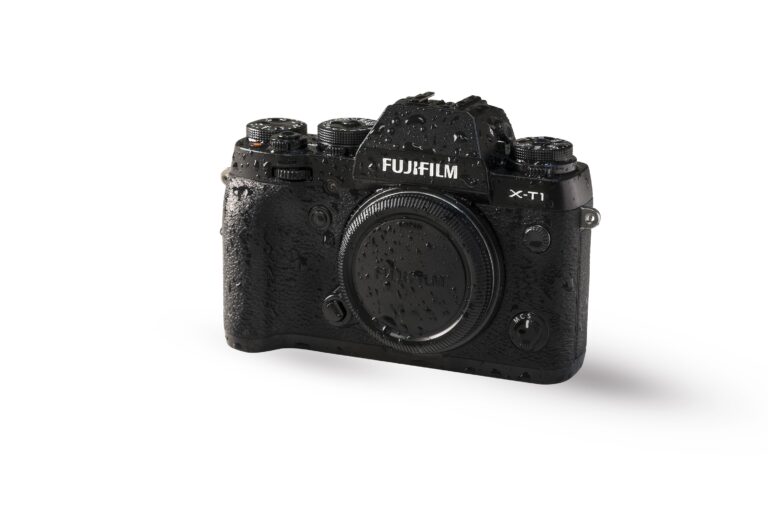 So late last Tues, April 15th, I get a package from Fuji! I’ve been wanting to take the FUJIFILM X-T1 for a test drive since the camera was announced.

So here’s what came from Fuji:

I took an extra day off  for the long weekend and went to the Toronto Zoo with my mother in law and niece. It was a perfect place for XT-1’s first test run. Even though I didn’t get a chance to read the instruction manual, I thought this would be a good chance to try out the camera’s Auto settings. And being a Pro shooter for so many years, that’s not something I’m really comfortable with. I came equipped with the Fuji XT-1, and the 18-55 lens (which fit nicely in my coat pocket), my Nikon D-800, and Sigma 70-200 2.8 OS lens slung around my neck. I took all of my shots of the animals with my Nikon mainly because I needed the long tele, and I didn’t have a longer lens with the Fuji.

When the Fuji finally came out of my coat pocket, we were eating lunch. Here’s the thing about my niece; she hates having her photo taken, so I almost never get shots of her! But when she saw the Fuji camera, she was like “what’s that Uncle Gary?” I told her it was a new camera I was testing out, flipped out the rear screen, and she instantly thought it was cool. I put the camera in A mode on the Shutter dial, and A mode on the lens, and I set the ISO to 200 take my first couple of shots:

I realize I’m shooting in jpeg mode, which for me is Taboo! But even still, the images look pretty darn good. Anyway, I quickly switch over to JPG and RAW shooting so I can see the difference later.

Here’s where I started falling for this camera. I had this big, honking Nikon that scares the bejeezes out of my niece, and here’s this little Fuji XT-1 with the screen out, and she doesn’t even know I’m shooting with it. The shots just came out great. I’m loving this zoom lens, and as you will see the OIS is really working because since I have the camera in auto mode, it’s choosing these low shutter speeds, check this next one out at 1/15th of a second.

I’m a quick learner, and I’m really starting to like the images that I’m seeing on the back of the screen. So I keep on shooting and my niece is letting me take pictures of her. I’m showing them to her on the back of the screen as we’re going along and she’s having a lot of fun! But I wanted to make sure I didn’t have any camera shake, so I quickly just threw the camera into Shutter Priority at 1/60 of second, I figure I should be able to hand hold here no problem. So my niece pulls out this crazy blue scarf, and I put the camera into Velvia mode, because I used to shoot Fuji Velvia when I was a film shooter, it always had these great vivid and sharp pictures. So next up lets look at a JPG file straight from the camera, and a raw file that has been processed in Adobe LR, one without adjustment, and one that I adjusted to match the quality of the Fuji JPG. (now I know the image is focused on the blue slushi, but hey I hadn’t read the manual yet, and still had the camera set to center point AF)

So what do you think of the 3X images above? So far I lean towards the RAW file, that I’ve adjusted in LR. I feel that the although I like the JPG file straight out of the camera, and the saturated sharp colours, I like the extra Dynamic Range and shadow detail that I was able to pull out of the RAW file.

So I gotta tell you that my zoo visit was a lot of fun, and I enjoyed my first experience with the XT-1. I think this is a Mirrorless camera that’s worthy of Pro Shooters and was mightily impressed! I’m going to share with you the rest of my easter weekend images in part 2 of this blog post, where you will see that I clearly read the instruction manual, so stay tuned. I will leave you with one shot that I did of the Pandas with my D800 (which you will clearly see that the OS feature on Sigma lenses works pretty darn good).

Sony a7III Review – What (almost) No One is Talking About