Good cinematographers are hard to find, and great ones can be even harder. Fortunately for us, director, producer and cinematographer Nick de Pencier falls into the latter category…

On June 25th, join us at Technicolor Toronto for the DOC Institute’s Masters Series Class with Nick de Pencier. Learn why he is among the top of his field and pick up some cinematography tips and tricks along the way.

During his Master Class, de Pencier will discuss how his philosophical approach to cinematography has informed technical and creative decisions over his twenty-year career. With rigs and select cameras on hand, de Pencier will reference his tools of the trade, which have ranged from the most unassuming small cameras for discrete work to the most sophisticated radio controlled and full-sized helicopter rigs. He will also share survival stories from his work in factual series and other mercenary pursuits that have rounded out his documentary practice.

Here’s a brief taste on what you can expect. 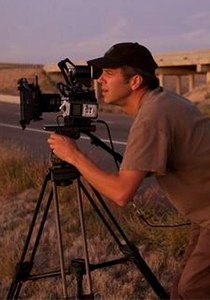 As both producer and DOP his credits include Let It Come Down: The Life of Paul Bowles and The Holier It Gets. In 2002, he produced and shot The True Meaning of Pictures, which was followed in 2003 by Hockey Nomad. He also co-directed, produced and photographed TV Ontario’s series of 40 short profiles on artists who have received Ontario Arts Council grants over the past 40 years.

He further produced Manufactured Landscapes, directed and partially shot Four Wings and a Prayer, and was the producer and DOP on Act of God. Among ongoing DOP work for docs and doc series on CBC, History, Discovery, National Geographic and many others, in 2012 he shot the documentary adaptation of Payback, Margaret Atwood’s Massey Lecture on debt, which was selected for Sundance. In 2013, Watermark, his most recent collaboration with Jennifer Baichwal and Edward Burtynsky, won the Toronto Film Critics Association’s Best Canadian Film Award.

For the past 20 years, director, producer, and director of photography Nicholas de Pencier has specialized in documentary filmmaking. He is also the President of Toronto based Mercury Films.