Toronto is one of the most cosmopolitan cities in the world. More than half of its 3 million inhabitants are born outside of Canada.

The challenge: photograph someone born in every single country of the world who now calls Toronto home.
Photographer Colin Boyd Shafer accepted the challenge. And over the course of a year (June 2013 – June 2014) captured Toronto citizens, along with a prized possession that trace their origins and represent tangible connections to their past.

Born in Kitchener, Colin Boyd Shafer is an award-winning documentary photographer, winning the 2013 Human Rights Watch Film Festival’s Photography Competition in London, UK, and the 2014 Toronto Urban Photography Festival’s Global Building Giants Award. His work has been featured on the cover of Asian Photography Magazine and F-Stop Magazine as well as international publications like Salon, The New Internationalist, Foto8 and BBC News. 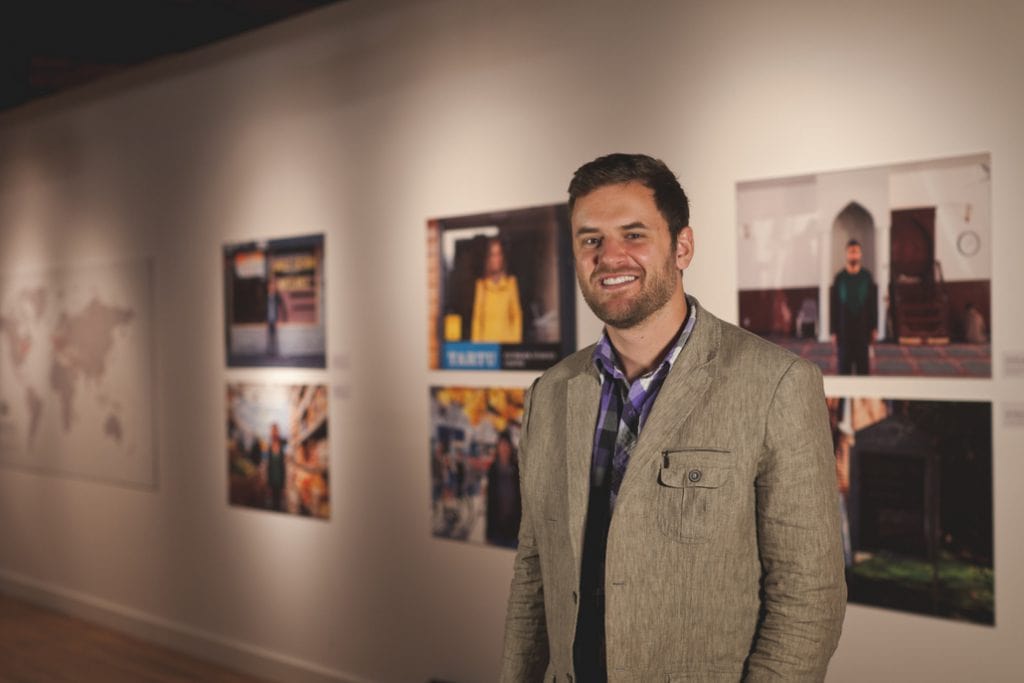 I have a long family history in photography. My great great grandfather opened his town’s first photography gallery. My mother put herself through Dental school photographing children on ponies.

I didn’t have a special mentor, but my mother bought me my first DSLR which was the true beginning of this journey in photography.

I love telling stories, and photography is my way. Photography that has a social implication inspires me – and this is why I am always leaning towards the documentary side of this art.

I love the portraits of Danny Street and Richard Renaldi, the documentary work of Dominic Nahr and GMB Akash, and the beauty/ feel of Mel Tjoeng’s work. I follow these photographers.

How did you come up with the concept of Cosmopolis Toronto ?

I was inspired by four things:
1. My interest and capability with portrait photography.
2. My longing to come back to GTA, spend time with Grandma (she is 89) and do a project in Canada.
3. I have an interest in migration (I started a project called Everyone Has Hope working with refugees in Malaysia, and my Master’s degree focused on the Stateless Rohingya of Burma).
4. Finally I think we say ‘diversity’ quite often but rarely (maybe never) are there ‘real stories’ about the individuals involved. I guess the aim of the project is to visualize/capture the diversity of this great city, and create an accurate picture of Toronto today.

What has been your most memorable experience while shooting this series?

Having the idea, pursuing the idea via crowdfunding with Indiegogo, and seeing around 130 people (many who have never been to Toronto!) contribute to making this idea come to life was very exciting.

During the shooting of the project, photographing Catherine born in Lesotho was exciting, since we did the shoot with her sitting on the edge of the very busy Gardiner Expressway. I didn’t think the photograph would be possible, but we managed to pull it off!

Finally every time I found someone living in the Greater Toronto Area from a very small country like Tuvalu and Liechtenstein it was really exciting!

The type of photography I like to do does not pay well, and is not glamourous. Cosmopolis Toronto was initially crowd-funded, which was great, and I am currently applying for grants so Cosmopolis Toronto can travel and for my upcoming project INTERLOVE. Finding the funds to get the project “out there” is a huge challenge.

Luckily I had awesome volunteers like Project Manager/Curator Vanessa Tamburro, and the team made of Lisa Takkinen, Jennifer Rodrigues, Keely Bland and Anna Sabrina Sopian. We also have an amazing communications volunteer Christine Liber, and an amazing company based in Germany called Marcellini made our website for free. Without the preceding people and many others who have taken the time to lend a hand, none of this would have been possible.

My career in photography is just starting … I hope!

Don’t sit on an idea. If you want to tell a particular story, do it. Also taking nice pictures is just….. taking nice pictures. My process of becoming a photographer, has been moving away from the single picture, to the series or collection. I see it as moving from superficial to something with depth.

Tell us a little about some of your favourite photo gear. A short list with your fav camera, lighting equipment, lens, modifiers. How does travel affect what you bring?

I have always shot with Canon equipment. This whole series was shot with a Canon 5D Mark II and a 50mm 1.2. I have never used anything but natural lighting in anything I have done.

I’m happy with what I have. Of course I wouldn’t mind upgrading to the 5D Mark III if Canon wanted to give me a gift.

I am currently beginning a yearlong portrait project called INTERLOVE, where my incredible team and I will be exploring how people (partners, friends, sibling) in Canada with differing faiths or beliefs manage to love.

The work from Cosmopolis Toronto will continue to be exhibited around Canada, and hopefully internationally. People can also view the series at cosmopolistoronto.com. People can keep up to date with what I am doing via colinshafer.com or Colin Boyd Shafer Photography on Facebook.

You can see a selection of Colin’s work in-store various Vistek locations, see the below schedule for a complete list.