When Extreme Runs in the Family: A Q&A with Justin Van Leeuwen 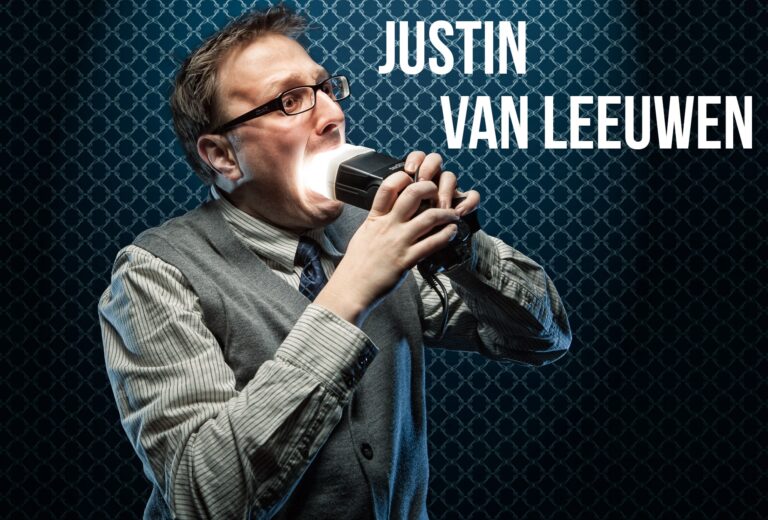 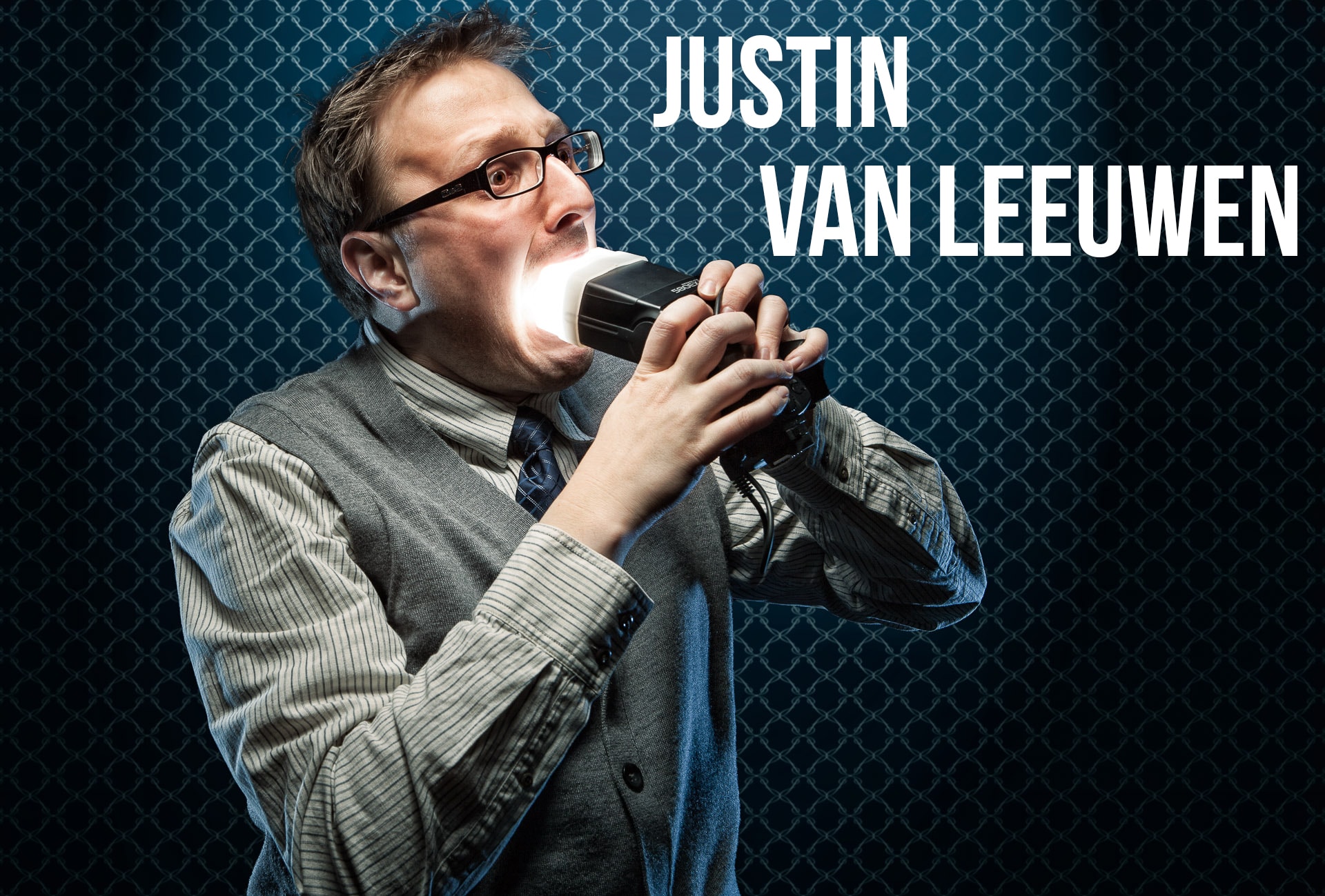 Vistek’s online and in-store photo gallery continues to bring to you a wide range of amazing and talented photographers from across Canada.  Currently showcasing at our downtown Toronto location until October 4 is the work of Ottawa photographer Justin Van Leeuwen.  His fresh approach to the family portrait is zany, entertaining and extremely creative.

I never went to school for photography, I had a hard time making it through school at all (having dropped out of high school for a bit before finishing a year after all my friends). Photography was a creative outlet I picked up in my mid-twenties. I had worked in a comic book store for most of my life previously, and it was this sort of combination of hobby and profession. After that, I kind of didn’t have either. I bounced around a bit, retail to office jobs, but slowly, in the background, I started playing with my friends SLRs. Then I got my own. From there it was just trial and error, learning how to use a a camera. There’s nothing particularly romantic about that. I didn’t have an old film camera handed down to me by my grandfather. I don’t have a tale about how I held my first camera as a toddler and knew then that’s all I ever wanted to be. I just loved the ability to create images, there was a technical achievement as well as creative that appealed to me, and I kept doing it. Eventually people started asking me to take photos for them; eventually I started to ask them to pay me. Everything I’ve ever done since has been me just trying to improve and push my work along to the next level.

In a way I did, not a long-term professional or anything like that. My friend Attila (http://www.thinsite.net) was my mentor early on. He literally taught me how to use my camera, and I idolized his images. I’ve been blogging for a long time now, and back in the day I guess there was a pretty tight community of amateur photo-bloggers. We all talked and shared ideas and one-upped each other, so that was another level of motivation in what we were photographing and how. Believe me, I was taking pictures of *everything* when I first got my camera. It’s actually kind of embarrassing… even worse, my current blog is still my old blog, which means if you dig back over a thousand posts ago you see some of the very first photos I ever took, ever. It’s interesting as an evolution of style for sure.

When I finally started to figure out what I was really into – taking pictures of people – I took in as much as I could online; David Hobby, Joe McNally, Scott Kelby these guys all make education their business, and I soaked up everything they had to teach.

Inspiration can sometimes manifest itself, though I have a few too many young kids kicking around for much of that, so often my work comes from a collaboration of ideas with my clients and my own interest in doing something different. I try to look to film, novels, or every-day life for what I want to do next, too much looking at other photos will lead to straight copying, and at this point in my career that’s not doing anyone any favours.

Do you have any favourite photographers?

I do still have a lot of photographers I follow and am constantly impressed with their work: Matt Barnes, Benjamin Von Wong and Dave Delnea here in Canada for sure. I’m also closely watching Joey L (also Canadian, but he’s in New York), Brad Trent (ditto), Miller Mobley and Cris Chrisman (sadly not Canadian); they have these great unique styles that I love.

What do you like the most about your job as a full-time photographer?

I honestly enjoy the hours it gives me. While you may have to put in an intense 48 hours into the production of a shoot, I can typically get away with working in “business” hours. This works well for my young family, since I’m not missing evenings and weekends as much as my Wedding Photographer friends. I have started to travel a bit more for work, which is kind of against what I just mentioned, but you get to go to some places and meet some people you just never would have had the chance to otherwise.

What has been your most memorable (crazy, interesting, amazing or inspiring) shoot?

A lot of my family shoots end up being all of the above. The whole “extreme family” photo thing grew out of me being home with my own kids after getting laid-off from the desk job. I needed to do *something* so I started planning out these fun shoots with the kids flying in the air or getting cooked (but not really) on the stove. When that moves into larger families like Julie Cole’s family of 8 . For the most recent one, we drove 7 hours to their cottage, then they said they wanted to shoot on a floating dock. I had to get my assistant with a big light out onto a paddle boat, where the wind was blowing him around like crazy, one of the kids stayed in the water to swim and keep the boat in place then we shot each member of the family individually. It’s a lot of fun, kind of stressful when stuff doesn’t go the way you need it to, but I like being able to make decisions on site and go with the flow too.

My biggest challenges have, honestly, been in business. You can be the best photographer in the world, but if you don’t know how to build a business you’re going to fail professionally. I’m definitely not the greatest photographer, but I’m also not the best business person. Building a client list and going after bigger markets has certainly been a challenge for me since I started full time two years ago.

Could it be this blog? Last month was pretty cool, getting flown down to New York to do an interview with Yahoo! on my work, though that’s more of a personal high than career. At this point in my career it’s pretty easy for me to say the greatest accomplishment is being able to pay my bills doing something I enjoy so much… most of the bills anyway 😉

I wouldn’t have bought so much stuff so early on? I incurred a bit of debt and had more gear than I knew what to do with. Of course, that’s left me well equipped now, but the pitfall of gear-lust is that you suppress your creativity through acquisition of goods. The creativity comes from inside the photographer, not from the camera they use.

Do you have any advice for photographers looking to get in to the industry?

Go to business school. Lots of crappy photographers making a living out there who are good at business. Imagine being a good photographer who’s also good at business!? And then this: Always shoot. Photography is something that you can actually get better at with practice – so practice all the damn time!

Ahhh, I’m a bit of a gear nerd, I’m not ashamed. I love my 5DMKIII, the new Sigma 35mm f/1.4 is hella-fun, but I think the 24-70 is still my go-to workhorse. I use the Elinchrom Ranger Quadra’s constantly and I do that with a mix of their own mods like the Deep Octa, or a Photek Softlighter. For solo and smaller editorial jobs I use my Canon 600EX-RT speedlights which are magical with the radio control, I use them with a Westcott RapidBox, the Photek Softlighter, an orbis Ringflash, or all of the above.

If not Gaffer’s Tape probably my Wacom Intuos 4 tablet. It’s something I interact with on a daily basis and when I don’t have it I barely know how to get work done.

I’ve been working on some tutorial videos with FJ Westcott but aside from that my life has been very client focused lately. Time for a personal project again, right?

Justin and his work have also been featured here:

Justin is also contributing writer and photographer for the following publications:

Justin’s work can also be seen across Canada at a Vistek Photo Gallery near you: