As one of the few modern masters of wedding photography, United States Nikon Ambassador, Jerry Ghionis has learned to create stunning images “in camera” in any situation.

With his easy to understand teaching style and entertaining delivery, Jerry will demonstrate how he brings out the best in his subjects and locations in a live shoot. He will articulate his thought process, technique and complete his vision as he proves his in-camera artistry. Witness and learn the art that comes before Photoshop. You will be inspired, challenged, educated and entertained by one of the industry’s brightest stars. 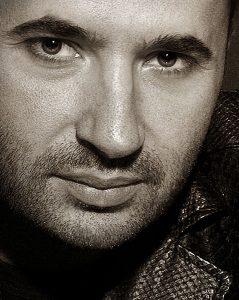 Widely regarded as one of the top five best wedding photographers in the world, Jerry Ghionis is based in Beverly Hills, California and Melbourne, Australia and travels frequently on international photography assignments and speaking engagements. With the flair of a fashion designer and the ingenuity of an architect, his style can be described where vintage glamour meets contemporary fashion. Renowned for his creativity, he not only has the ability to capture natural magic on a wedding day but he creates magic of his own. His love and empathy for people creates powerful visual storytelling. With the innate ability to make everyone look and feel beautiful in front of his camera, Jerry’s images are often simple yet a complex blend of soul, drama, imagination and technical skill. Whether he is shooting a glamour session, lifestyle portrait or boudoir beauty, Jerry has the ability to bring out the best in any situation.

Creator of the Ice Society, a photography training site, and inventor of the Ice Light, a revolutionary LED continuous light, one of Jerry’s passions is the creation of his non-profit charity, the Soul Society, which he co-founded with his wife, Melissa. Their charity was created with the purpose of caring for poor, homeless and orphaned children in third world countries, one soul at a time. 2014 marks the launch of an app created by Jerry called, Picpockets: World’s Best Photographs. It is the “go to” app for photography education and inspiration. In 2014, Jerry reinvented the staple in every photographer’s tool kit with the Omega Reflector. Manufactured by Westcott, it creates gorgeous beauty lighting as the world’s first 10-in-1 shoot through reflector.

He continues to raise the benchmark of excellence as an artist who is admired and respected by his peers and loved by his clients.

Calendar powered by The Events Calendar