It’s pretty safe to say that the Atomos Ninja V 5″ recorder has been receiving the lion’s share of attention and firmware updates these days. But rest assured, Atomos hasn’t forgotten their other products, and the latest firmware update has been released for the SUMO 19 monitor/recorder.

Find out what’s new and improved below.

From the AtomOS ver. 9.3 release notes 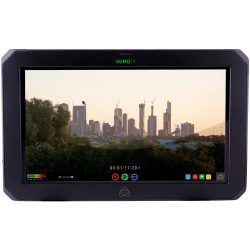 With the installation of this new update ALL users will be required to activate ProRes RAW, as a codec (as they would have done for DNx activation).

Following the Firmware update, if in ProRes RAW mode the SUMO will default back to ProRes HQ. When a RAW source is plugged in, or a user selects ProRes Raw Codec, a UI popup will ask for activation code to continue.

Even if the user has already been shooting with ProRes RAW, they must activate it in this update by visiting Atomos website atomos.com/activation and follow the online instructions to generate a code.

With the increase in the use of Anamorphic lenses in productions we’ve added:

The first production monitor that also records 4K 12bit Raw, 10bit ProRes/DNxHR, plus 1080p60 live switching and recording. Unlock the true potential of your RAW cinema camera with the Sumo19. Preserve your sensor’s pristine pixels in ProRes RAW at up to 5.7kp30, 4kp120 DCI/UHD and 2kp240 DCI/HD. CDNG supports up to 4kp30 DCI. Sumo19 is compatible with Sony FS series, Canon C300MKII/C500 or Panasonic EVA-1/Varicam LT. Record up to 4kp30 in CDNG.