The Z CAM E2 series of cameras are getting another firmware upgrade that adds some new features and resolves some bug fixes.

Updated August 6, 2020: Z CAM with Version .96 or greater can now be used as a USB webcam. Simply connect to your computer with a USB A to C type cable.

Added USB webcam and streaming features for Mac and PC:

This is the simplest way to connect with live meeting and collaboration apps like Zoom, etc.

Updated July 2, 2020: The joint Z CAM and ATOMOS* 12-bit Apple ProRes RAW at up to 4K60p support for E2 cameras firmware update for their Ninja V monitor/recorder is now available via the ATOMOS support page here.

Shot on Z CAM E2 + Ninja V in ProRes RAW: ‘Walk on the wild side’ by Ludeman Productions

Note: This film was shot on pre-production firmware. The feature will be available in the Atomos Ninja V via a free AtomOS update expected June 2020. 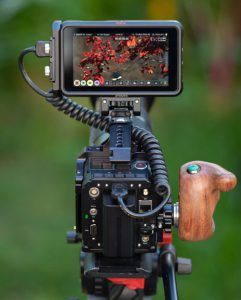 The upcoming (free) firmware update from Atomos, will allow the Ninja V to record ProRes RAW HQ/ProRes RAW at up to 4K60P from the HDMI port of the E2.

Atomos and Z CAM have also announced the development of touch-screen camera control for any E2 camera with the use of a dedicated Atomos control cable (sold separately).

Atomos says that “for extreme reliability and affordability” footage will recorded to the Ninja V using AtomX SSD mini SATA drives, or other approved SSD media.