“The Wireless GO II is an ultra-compact and extremely versatile wireless microphone system consisting of a dual channel receiver and two transmitters.” 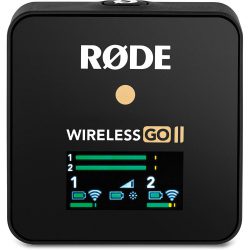 One of the most innovative features is the Wireless GO II’s ability also record audio in the transmitter so if you have any issues you can recover the file by connecting via the USB-C port.

Now, with the latest firmware update users will also have the ability to do on-board recording without the need for the transmitter to be connected to the receiver, basically allowing Wireless GO II TX units to be utilized as stand-alone compact field recorders.

The Wireless GO II is an ultra-compact and extremely versatile wireless microphone system consisting of a dual channel receiver and two transmitters. The transmitters act as a clip-on microphone, featuring a high-quality in-built microphone for completely wireless operation, or they can be used as a belt pack with an external lavalier, delivering crystal-clear audio for any content creation application.

The Wireless GO is the world’s smallest, most versatile wireless microphone system. The transmitter works as both a clip-on mic or as the world’s smallest belt pack for a RØDE lavalier, sending crystal clear broadcast-grade audio via 2.4GHz digital transmission to the ultra-compact on-camera receiver.