DJI RoboMaster S1 – Learn about robotics while battling your friends!

Inspired by DJI’s annual RoboMaster robotics competition, the RoboMaster S1 is a user configurable, educational robot “battlebot” that aims to teach kids of all ages about robotics and programming and then apply that knowledge to duke it out with other DJI RoboMaster S1 owners in “Thunderdome” style and/or friendly robotic battles.

The S1 provides users with an in-depth understanding of science, math, physics, programming, and more through captivating gameplay modes and intelligent features.

Designed as an educational tool, the DJI RoboMaster S1 arrives completely disassembled requiring you to build it from the ground up using the 46 customizable components that make up the unit.

Once it’s assembled, you can jump right in using the RoboMaster app and take the unit for a test drive.

The app itself is split into three sections, Solo mode, Battle mode and Lab mode.

Solo mode allows you to operate the S1 as you would a typical RC car.

Battle mode features a couple of different game types and gives you the opportunity to show your dominance on the battlefield by going head to head with other S1s.

Another cool thing about the S1 is that is uses AI technology that allows the unit to recognize gestures, sounds and other S1 robots.

The AI feature give you the ability to program your S1 to visually follow a marked path on the ground, set up to 44 different vision markers (include numbers, letters and special characters) to look for and follow as well as the ability to recognize and track specific people.

It also has built in clap and gesture recognition which gives you the ability to program it to perform specific manoeuvres based on sound or physical movements.

The S1 features two different blasters that fire both gel beads (non-toxic) and infrared beams towards your target, and when firing, there are sound effects to add to the experience.

Six intelligent sensing armour panels are located around the outside of the S1 and are used to detect gel bead or infrared beam strikes from other S1 units. These are also used by the the Battle mode referee system to analyze and communicate hit data, incorporating it into the gameplay in real time.

The turret containing the blaster units is mounted on a 2-axis gimbal with a yaw/pitch rotation range of 540° × 65°. It also houses a a tiny first person view camera that allows you to visually track and see whatever you’re aiming at. 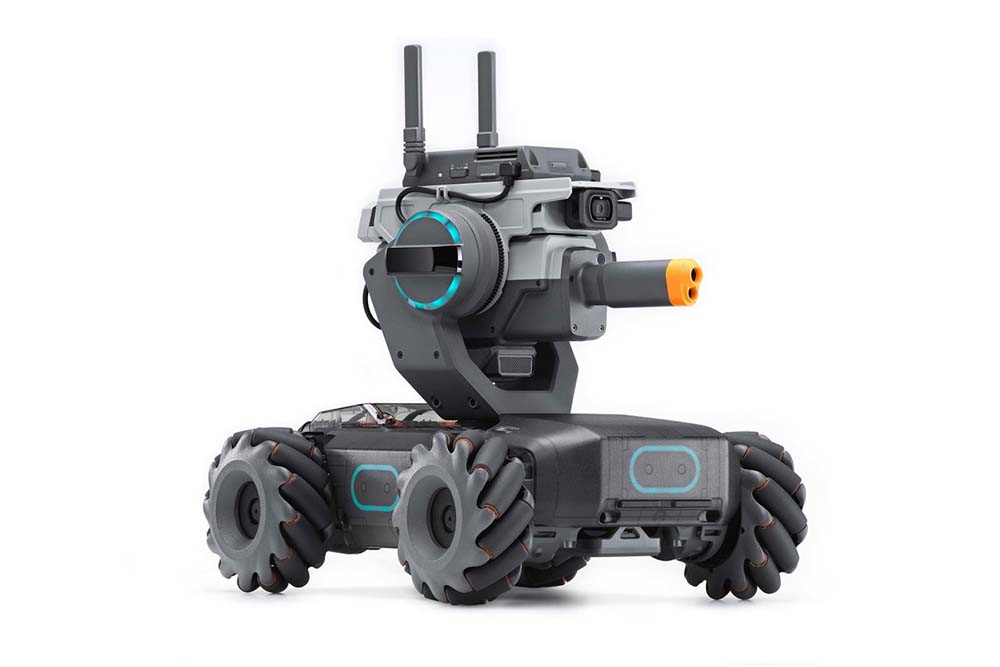 Even with a fairly hefty $500 USD price tag, the RoboMaster S1 is probably going to be a hit, especially with people who have a strong interest in robotics and programming, but also with parents who are looking for a fun, cool and educational way to spend some quality time with their kids.

The RoboMaster S1 is available via the US DJI store starting June 12th. No word as of yet when it will be available in Canada.