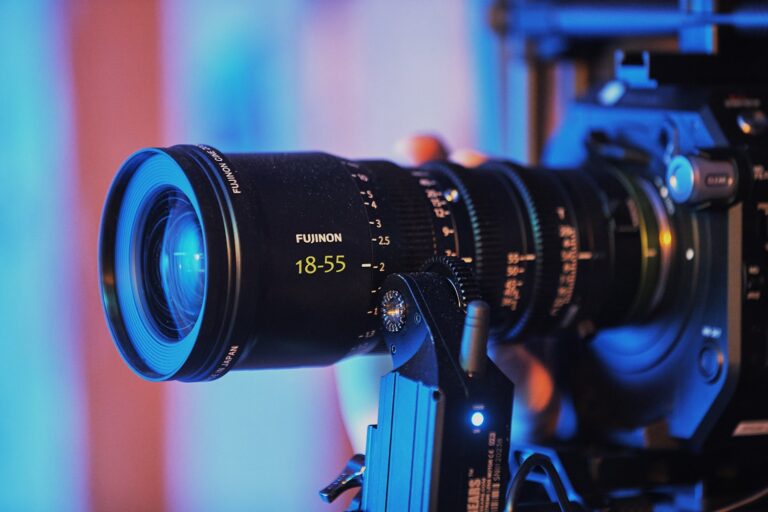 Vistek Video Producer Dale Sood was granted early access to FUJINON’s amazing new MK 18-55mm T2.9 Cinema Lens so he could review it and put it through its paces.

To really push the limits of this amazing new lens, Dale wanted to think big, so with the help of Canadian Singer Chloe Charles, he shot a music video for her upcoming track “Head High”.

Watch our full hands-on review (featuring a sneak peak of the Chloe Charles music video we shot) to see what this bad boy is capable of.

Wayne, N.J., Feb. 22, 2017 – The Optical Devices Division of FUJIFILM has unveiled the MK Series of cinema lenses for E-mount cameras, which boast advanced optical performance, ultra-compact and lightweight design, as well as superb cost performance. The first in this series to be introduced, the FUJINON MK18-55mm T2.9, is a standard zoom with an 18-55mm focal length. It will be available in early March for $3,799 USD. The entire “MK” series is designed with the ‘emerging’ cinematographer in mind, whether shooting a live event, online programming, documentary, corporate video, wedding, independent or short film production.

The next in the series, the FUJINON MK50-135mm T2.9*1, will be available this summer. With a combined focal length range of 18mm-135mm in the Super 35mm format, together the first two “MK” lenses cover the most frequently used range utilized by emerging cinematographers. The series offers fast lenses with T2.9 speed across the entire zoom range, enabling a shallow depth-of-field.

“The rapid growth in popularity of content produced by emerging cinematographers has expanded the use of cinema and digital photographic cameras,” said Tom Fletcher, Director of Sales, Optical Devices Division of FUJIFILM. “And the heightened need for programming has, in turn, boosted demand for high-performance cinema lenses, which are ideal to achieve a shallow depth-of-field and a beautiful bokeh. However, since they are typically large, heavy and expensive, those involved in online and other lower cost productions often opt for interchangeable lenses for digital cameras, which have been more affordable and mobile. The problem is that interchangeable lenses for digital cameras are designed primarily for shooting stills, and therefore prone to focus shift and optical axis shift while zooming.”

The “MK” lenses are designed to maintain consistent color temperature with all FUJINON cinema lenses, which simplifies color grading*2. The series also inherits the FUJINON cine lenses’ advanced edge-to-edge optical performance and low distortion*3, while boasting compact and lightweight design as well as outstanding cost/performance. The MK18-55 and MK50-135mm weigh in at a light 980 grams/2.16 lbs with front diameters of 85mm and lengths of 206mm. The MK18-55mm’s minimum object distance (MOD) is .85 meters/2.78 feet, while the MK 50-135mm’s MOD is 1.2m/3.93 feet.

“Many independent shooters use DSLR lenses, which aren’t designed for moving images. Still lenses breathe considerably, and they have no adjustable manual iris,” said Fletcher. “Our MK’s have a seamless manual iris, zero breathing, no ramping or zoom shift, and 200-degree focus rotation. They maintain focus completely throughout the zoom range while covering Super 35mm sensors.”

In addition to their lightweight and compact build, the “MK” lenses are designed from the ground up with the operator in mind. Only one matte box and one filter size are needed between the lenses. Time-saving features include a macro function that allows for a broader range of close-up shooting, and gears for the three rings are positioned in the exact same place, which eliminates the need to re-position accessories when switching lenses.

The lenses each contain a Flange Focal Distance adjustment function*4 to achieve optimal camera and lens matching. The short flange focal distance contributes to the lenses’ compact size and lightweight. Distances are listed in feet and meters.

The iris supports seamless adjustment that is free of clicking. This enables precise exposure adjustment without any sound from clicking between T-stops.

The lenses also feature three rings for manual and independent adjustment of focus, zoom, and iris (aperture), with the gear pitch*5 of 0.8M (module). The focus ring can rotate fully up to 200 degrees to facilitate precise focusing.

The “MK” lenses are compatible with E-mount*6 cameras with the Super 35mm*/ APS-C sensor.
X Mount versions of the MK lenses (with focal lengths of 18-55mm and 50-135mm) used in the FUJIFILM X Series line of digital cameras (with APS-C sensors) are being developed for launch by the end of this year. Information about the X Mount lenses will be provided as soon as more details are confirmed.

Key:
*1 T-stop value is an index that indicates brightness of a lens based on its F-stop value and transmission rate. The smaller the value, the greater amount of light the lens transmits.
*2* Processes of correcting colors during movie editing
*3 Distortion refers to a phenomenon in which an image formed through a lens becomes partially contracted or extended at the edges.
*4 The position of lenses’ image-forming plane can be adjusted according to each camera’s flange focal distance (distance from lens mounting reference plane to sensor)
*5 Distance between gear teeth
*6 Lens mount format developed by SONY Corporation

Behind the Scenes Photos from MK 18-55mm Video Shoot