By VistekOctober 14, 2020No Comments5 Mins Read

Canon has announced their latest consumer level mirrorless camera, the EOS M50 Mark II as well as a new Speedlight that’s designed to work with any EOS camera.

The M50 Mark II boasts features and improvements over the original, that will appeal to vlogger and video content creators looking for a less expensive, yet feature rich alternative to create and share their visions with.

When it comes to content, whether stills or video, the EOS M50 Mark II goes far beyond letting you just scratch the surface of your vision.

Low light capabilities have been improved over the original, now offering a native range of ISO 100-25600, expandable to 51200. 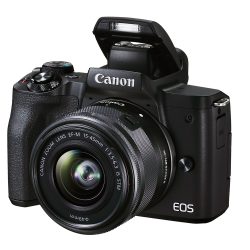 The Dual Pixel CMOS Autofocus system adds improved eye and face-tracking support making it available for use in all still and video modes.

The M50 Mark II also introduces a vertical video feature which according Canon give creators the ability to mix up shot lengths and angles to create videos that more interesting and unique. It is important to note that vertical video isn’t supported when using the live streaming function.

There are a couple of other new features to note.

Just like the stills countdown timer, but for video, the movie self-timer with touch record control feature allows you to set the amount of time (between 2 to 10 seconds) you need to get back into the scene after pressing record.

The movie digital zoom feature works with both fixed focal length and zoom lenses, allowing you to magnify the centre part of the LCD screen offering a more intense, close-up look at the subject.

The EOS M50 Mark II carries and builds on the strong performance of the popular EOS M50 with improvements that will be especially notable for content creators like vloggers and more. You still get the impressive image quality of the 24.1 Megapixel CMOS sensor, power of the DIGIC 8 image processor, 4K UHD 24p and HD 120p for slow motion video and more, along with some additional boosts. When it comes to content, whether stills or video, the EOS M50 Mark II goes far beyond letting you just scratch the surface of your vision. 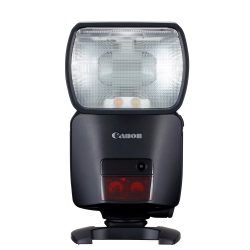 Designed to work seamlessly with any Canon EOS camera, the EL-1 features a rechargeable lithium-ion battery pack, high-speed recycle times as low as 0.9 seconds and increased number of flashes, up to 355 times before having to be recharged.

The Xenon gas filled flash tube offers better output stability and up to 14 stops of total flash exposure and utilizes a new active cooling system that helps circulate air throughout the flash head allowing for up to 170 continuous shots.

Other features include an improved user interface, new joystick, improved control layout, full 180º swivel and up to 120º of upwards or 7º downwards bounce. 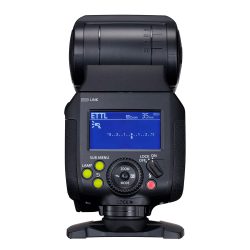 The Speedlite EL-1 is the next generation, all-purpose flash that professionals and advanced amateurs have been seeking, providing durability, reliability and a range of power that opens up a number of possibilities. The new Xenon flash tube offers increased stability for flash output and 14 f-stops of total flash exposure range allowing you to shoot anywhere from a bright 1/1 to a dim, low power 1/8192 to precisely sculpt your scene with light. The new rechargeable Li-ion Battery Pack LP-EL supplies a shorter recovery between flashes as well as an impressive number of continuous flash opportunities, and conveniently lets you recharge when needed.