Nikon has announced the follow-up to their extremely popular D750 camera, the D780. Inheriting features found on the pro-level D850 and D5 cameras, the D780 also boasts some of the newer tech and features found in their latest Z Series mirrorless cameras as well.

The New Nikon D780 Will Exceed Expectations with the Ultimate Combination of Speed, Powerful
Performance and Premium Features at an Uncompromising Value

The D780 also offers a continuous shooting speed of up to 7 fps at full resolution and shutter speeds as fast as 1/8000 for up to 900 seconds with certain settings enabled.

For those who express themselves without labels, the D780 is capable of bringing every spectacular vision to life and inspiring completely new ways to create. Versatility through the splendor of full frame photography and 4K video, slow motion, time-lapse, remoteless long exposures and a host of impactful creative shooting tools to keep inspiration flowing.

One of the more interesting features found on the D780 is the two very different AF shooting systems that are available. 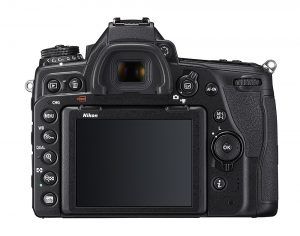 The first system works through the optical viewfinder, and is paired with an enhanced AF algorithm inherited from the D5. This system uses the 51-point AF system and 15 cross-type AF sensors to maximize accuracy and an upgraded 180K-pixel Advanced Scene Recognition System, to analyze the scene to ensure balanced exposures and accurate color reproduction.

Nikon says that this AF system will also reliably track rapidly moving subjects such as wildlife, even in challenging lighting conditions, down to as low as to -4EV.

Silent shooting is also available with the ability to shoot at speeds of up to 12 fps without shutter noise.

Also of note, the D780 is Nikon’s first DSLR to feature Eye-Detection AF, offering a real-time ability to track multiple eyes in a given scene maintaining tack-sharp focus particularly when shooting portraits and/or candid shots.

The D780 delivers the best video capabilities of any Nikon DSLR

For video, the D780 incorporates technology found in the Nikon Z 6 mirrorless camera and is capable of capturing full-frame 4K video at 30 fps with full-pixel readout in addition to a variety of other frame rates and resolutions including Full HD/120p.