Geared more towards the video crowd, the Sony a7SIII boasts some pretty impressive features, particularly it’s low-light capabilities, and might just be the best hybrid video camera to come to market in recent years. 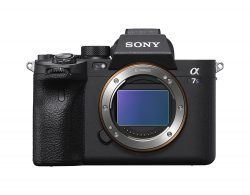 At the heart of the Sony a7SIII is an all-new 12.1MP, backside illuminated full-frame sensor with 2 times readout speed, designed to capture ultra-clean low-light images with an ISO range of up to a mind boggling ISO 409,6003 (expanded) for both video and stills.

In addition to the 759 phase detection AF points, real-time Eye-AF and real-time AF tracking has been improved by approximately 30% down to EV-6. 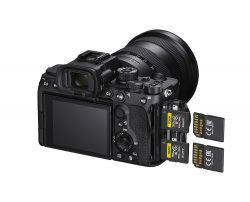 Sony has eliminated the 29 minute 50 second recording interval found on previous versions and has vastly improved the internal heat distribution to the point that Sony says you’ll be able to continuously record 4K 60p footage for up to an hour without the camera overheating.

The dual card slots are compatible with both CFexpress Type A and SDXC/SDHC cards to ensure fast data transfer, and you’ll be able to output 16-bit, 60p RAW footage via the full sized HDMI Type-A connection to a compatible external recorder/monitor.

On the exterior of the camera, you’ll find the improved 9.44M dot QXGA OLED viewfinder, a world’s first according to Sony, as well as a 3” flip-out, vari-angle LCD touchscreen that gives you access to menus and controls. 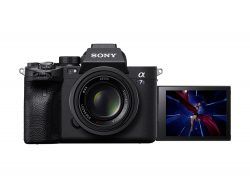 Speaking of menus, Sony has finally gone with a new, intuitive menu layout featuring 3 level structure and touch navigation that should prove to be less confusing to navigate through.

The a7SIII also boasts 10 in-camera customizable Creative Looks for that can be used for both stills and movies.

For stills, the a7SIII can capture up to 1000 RAW+JPEG at 10fps with continuous autofocus and exposure
as well as 10-bit HEIF HLG images with selectable 4:2:0 or 4:2:2 sampling.

Introducing the long-awaited a7S III. Optimized for video production, with an all-new 12.1MP 4K Exmor R backside-illuminated full-frame sensor built for superb sensitivity and speed. The new BIONZ XR processing engine, with significantly more processing power, can capture and record up to 120p 4K and HD 240 frames at 10-bit 4:2:2 with full pixel readout (no skipping or binning) in all recording modes, including Intra-Frame (All-I). It also has the world’s highest-quality viewfinder at 9.4M dots, and a side swing-out rotating LCD panel. It delivers super-clean low-light, low-noise images at up to ISO 409,600 with 15+ stops dynamic range. The advanced processing means seriously reduced rolling shutter, plus Sony’s fast hybrid, face, eye, and animal autofocus with 759 phase detection AF points, even in HFR video modes. Along with 5-axis in body stabilization, there’s a simpler new menu structure, with touch control, a passive in-body cooling system and so much more, the a7S III has definitely raised the bar!