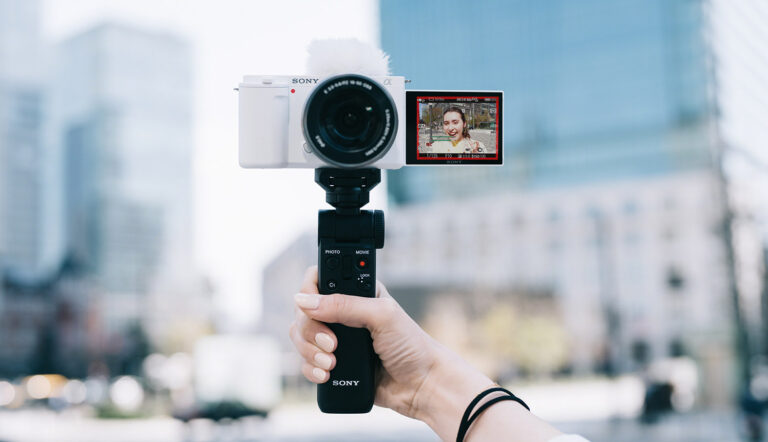 Featuring a large 24.2MP APS-C Exmor CMOS Sensor paired with a fast BIONZ X processor the ZV-E10 is capable of producing 4K/30p (from an oversampled 6K signal) or 1080/120p video with a maximum bitrate of 100mbps and 24MP stills in either RAW or JPEG format.

With the ZV-E10, Sony has taken features (including the sensor) previously found on the popular a6100 and reconfigured them to better support video content creation. 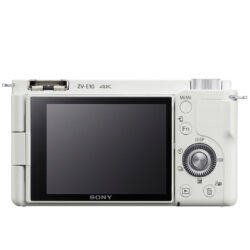 First off, Sony has removed the electronic viewfinder (EVF) helping to reduce both the size and weight of the already compact body.

It features Real-time Eye AF, face detection and touch tracking while recording video and subject recognition for both humans and animals when shooting stills.

There is also a flip-out, vari-angle touchscreen (with touch focus) which allows creators to view themselves while filming and a one-touch mode button that allows users to switch from stills to video with a single press.

Sound recording can be monitored in real-time via the dedicated headphone jack.

The ZV-E10 also offers some new features that vloggers will find handy, including a variable soft skin effect, a background defocus button that toggles the bokeh effect on and off by changing aperture settings and a automatic product showcase mode that smoothly transitions focus to the object closest to the camera. 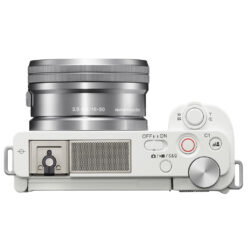 It can also be used as a livestreaming webcam by simply connecting it to a computer or compatible smartphone via a USB C cable that is USB Video Class (UVC) or USB Audio Class (UAC) compatible.

In addition to the battery, the camera can also be powered via USB C while streaming, extending the operational time beyond the 125 minutes maximum recording time that Sony says the battery is capable of.

Finally, the Sony alpha ZV-E10 will be available in two colours, white or black, in either a kit version bundled with the SEL 16-50mm PZ Lens or the body only version without a lens.