In a move that is sure to make GoPro nervous, DJI has launched their own action camera, the 4K HDR capable Osmo Action.

Designed to directly compete with GoPro’s Hero line, the DJI Osmo Action (OA) is a dust-proof, shockproof (when dropped from up to 1.5 m/5 ft), freeze-proof (down to -10ºC/14ºF) and waterproof (without an additional housing) to a depth of 11 m/36 ft).

The Osmo Action features dual colour screens, a 1/2.3″ CMOS sensor that captures 12-megapixel still images (JPG or RAW) and 4K video up to 60fps at 100Mbps and is DJI’s first handheld camera to feature their new RockSteady image stabilization. 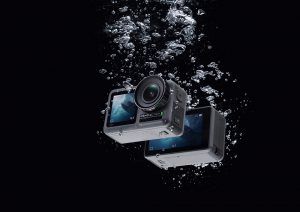 The body itself has a more textured finish, giving it a grippier feel than the GPH7 which is nice, as it provides a more secure feeling when hand held.

The user interface buttons are well-placed, with the power and record buttons located on the top and the quick switch (QS) button which allows you to change settings, modes and flip between screens, on the side above the USB-C and Micro SD card slots are located.

As mentioned, the OA features two colour screens, a 2.25-inch touchscreen on the back and a forward facing (non-touchscreen) 1.4-inch display on the front designed to make shooting vlog footage and action selfies easier. 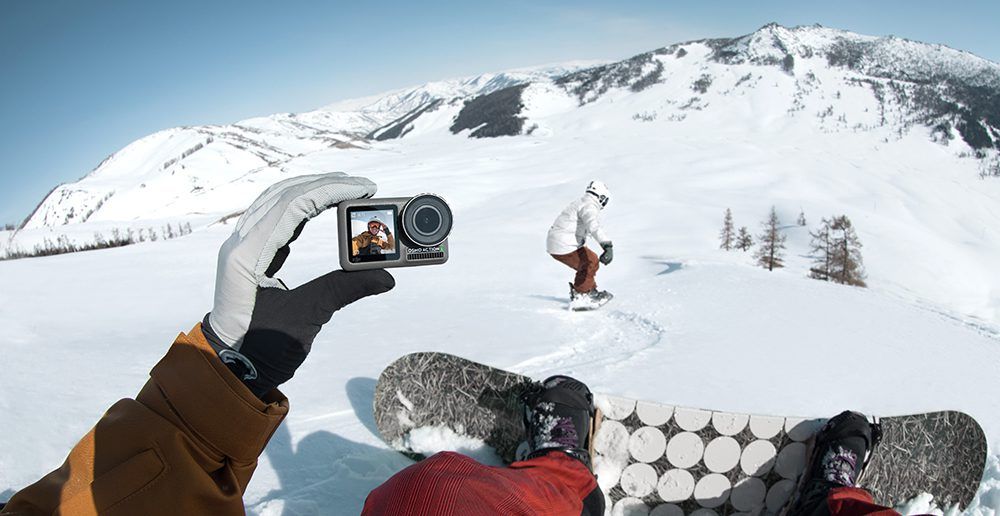 Both screens feature a brightness of 750 nits, which means you’ll be able to clearly view footage on the screens even when shooting in direct sunlight. 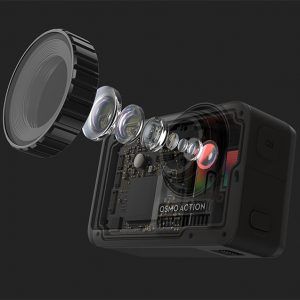 Another nice touch is that the lens filter cap is easily removed by unscrewing it rather than having to wrestle to twist it off as with the lens cap on the GPH7.

The removable battery when fully charged, will last for up to 93 minutes when shooting at 4K/30fps with EIS enabled or up to 135 minutes at 1080p/30fps without EIS. The battery can be fully recharged in about 90 minutes.

It also features dual microphones, speaker and accepts micro SD cards up to a maximum of 256 GB.

Behind the filter cap, is a fixed 145º FOV, f/2.8 three-glass aspherical lens designed to reduce warping and distortion.

The OA can shoot High Dynamic Range video capturing an extra 3 stops of dynamic range which helps to preserve details that can be lost in difficult lighting conditions.

One of the most hyped features of the Osmo Action is its RockStead electronic image stabilization (EIS) technology.

RockSteady uses high-performance stabilization algorithms in combination with EIS to produce what DJI claims will be “stable, shake-free footage no matter how heavy the action gets.”

However, RockSteady does come with a caveat. It doesn’t function in the modes listed below.

Like the GPH7, the Osmo Action features different shooting modes including:

There is also a Voice Control feature with five different voice commands that control functions such as filming, still capture and power down.

The Osmo Action works with DJI’s Mimo app via Bluetooth and allows you to transfer and edit videos on the fly and using the story templates feature, you can edit and share highlights to social media without having to leave the action.

The DJI Osmo retails for $469.99 CDN and is currently available to pre-order from Vistek via the link below.

Meet Osmo Action, DJI’s versatile new action camera that was built to go wherever adventure takes you. Dual screens and an intuitive design let you effortlessly capture your world, and advanced technologies like RockSteady stabilization ensure breathtaking results that give viewers a front seat to your moments.

Take Osmo Action anywhere and unleash your other side.