While the FX6 is part of Sony’s “Cinema Line”, in reality, it’s more of a blend of Cinema and Alpha style cameras, sharing a lot of the a7S III capabilities, but housed in a larger “Cinema” style form factor better suited for video applications. 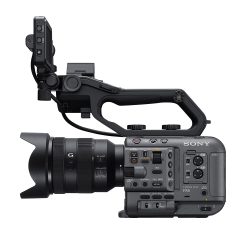 The FX6 may be the smallest of the line-up, it boasts some impressive features including a 4K, 10.2MP back-illuminated sensor, 15+ stop of wide dynamic range, phase-detection AF and Sony’s new BIONZ XR processor (offering 4X faster processing performance than the FS5 II).

It also features a base sensitivity of ISO 800 with an enhanced sensitivity setting of ISO 12,800 (expandable up to 409,600) for shooting in low and very low light conditions.

Sony says that the Fast Hybrid AF will work with over 50 native E-mount lenses.

The FX6 also features internal, electronic variable ND filters that can be set to auto or adjusted manually in stepless increments between 1/4 and 1/128 ND.

The Sony FX6 is a mighty powerhouse in a mini body. Nimble, portable, but containing much of the power of the FX9. In this review we cover all our favourite features and who this new release is for. 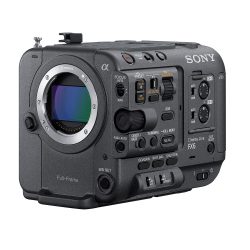 Like the FX9, the FX6 features Sony’s advanced cinematic colour science, including S-Cinetone built-in producing more pleasing skin tones and losing the “coldness” that some people have complained about with past cameras.

S-Log3, S-Gamut3 and S-Gamut3.Cine are also available right out of the box providing even more colour grading options for post-processing. 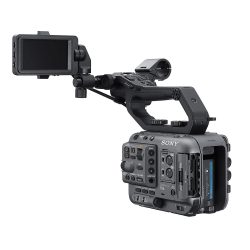 However, like the a7S III, if you want to capture RAW footage, you’ll need to invest in an external monitor/recorder such as the Atomos Shogun 7 which can record 12-bit Apple ProRes RAW via the SDI output.

As mentioned above the FX6 features a 12G-SDI output that supports 16-bit RAW, HDMI output and timecode in/out, in addition to built-in Wi-Fi and four channel audio recording (via an XLR Interface, Multi-Interface Shoe and built-in Stereo Mic). 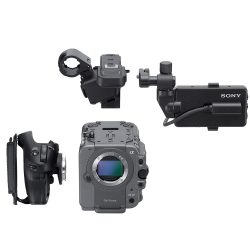 The 3.5-inch LCD Viewfinder can be attached on multiple locations of the camera body and use a quick access control menu to access commonly used features including, Codec, Imager Scan Mode, Picture Size and Frequency, Base ISO and Sensitivity, Shooting Modes and Audio Levels.