Rooms for Tourists: Q & A with Heather Saitz 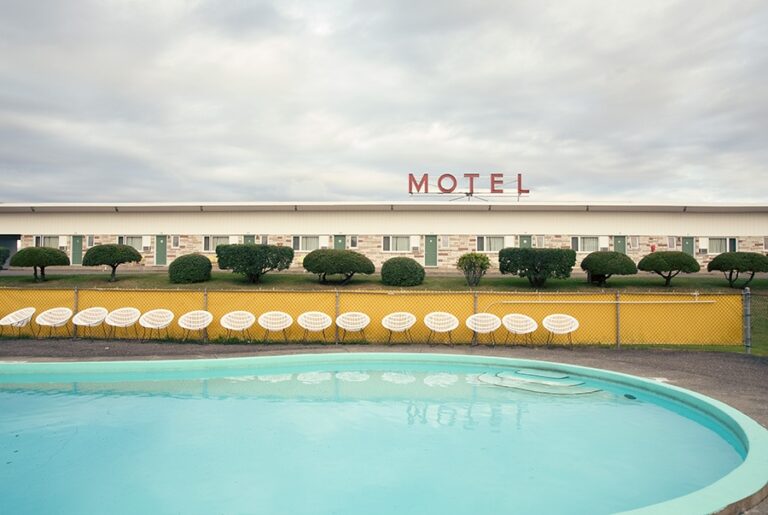 Vistek’s Online and in-store Photo Gallery continues to bring to you a wide range of amazing and talented photographers from across Canada.  Currently showcasing at our downtown Toronto location, until the end of May as part of the Scotiabank CONTACT Photography Festival…

I studied Photography at Sheridan College in Oakville and Communications Design at Seneca @ York. Fresh out of photo school, I went to work as a studio assistant for a Toronto catalogue house, shooting “glamorous” stuff like tools and bedding for clients like Zellers and Home Depot. I eventually left the commercial studio to work as a freelance assistant for several years with many successful Toronto photographers, some of who have gone on to do really amazing things. I wouldn’t trade my art school experience for anything, but I’ve learned way more assisting and working in the “real world” of photography.

How long has photography been a passion?
How did you get your start? Did you have a special mentor?

I’m going to lump these into one question as they both relate directly to each other.

I’ve been doing photography for over 17 years. I got my start through my Dad – he worked as a photojournalist in the early 1970’s in Toronto. He both influenced and nurtured my love of photography. He bought me my first camera and built me a darkroom in our basement when I was 17. I was also fortunate to have attended a high school known for its Integrated Arts Program, where I first studied photography in a formal setting.

Oh there are so many – where to start!? I had the opportunity to see Fred Herzog speak in Calgary recently, and it was a truly moving experience for me as I admire his work and process so much. Other favourites include Tim Walker, Martin Parr, Mel Bles, Olga Chagaoutdinova and Alec Soth to name a few.  Commercially, I’ve always admired Annie Leibovitz, but mostly for her older work when she was at Rolling Stone and her portrait work around that time.

Travel always inspires me to try new techniques, and I will often travel with film cameras. I also draw a lot of inspiration from the things happening around me. I’ve sort of trained my eye to look below the surface image of things – to see everything in the world as a potential photograph.

I’ve described my style in the past as a type of stylized photojournalism. Someone told me once my photos sometimes look like paintings. I think this is due to my graphic design background, which definitely influences my photographic style in terms of having a very strict eye for colors and composition.

My greatest accomplishment happens daily: the fact that I wake up each and every morning and do what I love for a living — that’s the greatest feeling of all.

What was the inspiration behind Rooms for Tourists?

I’ve been photographing motels since approximately 2009, but even earlier than that, before I consciously realized I was documenting them. My entire body of non-commercial photographic work explores the narratives of yesteryear in order to provide a subtle social commentary on contemporary society. Motels fit right into this concept (I guess the reason why I’ve always photographed them.) I’m fascinated by the Motel’s rise and fall in society, its relationship to the automobile, and the “American Dream”; it’s post-war entrepreneurial expression and “Googie” architecture. Motels are so fascinating to me on so many levels, I just can’t pass them by. 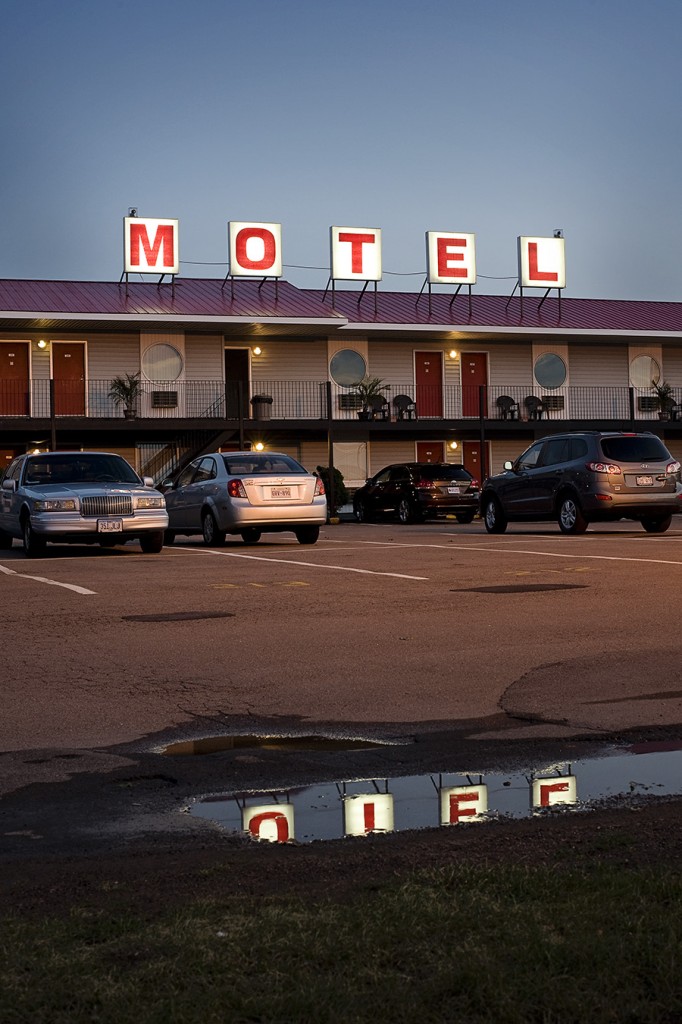 What was your greatest challenge in shooting this series?

I found that a lot of people directly involved with the Motels didn’t want anything to do with the project, which was upsetting to me as I envisioned getting to know some owners and managers of the establishments and taking their portraits. Research was also very time consuming and not always accurate. I would spend hours researching motels I wanted to photograph, but when I finally ventured out to photograph them, some had been torn down, others renovated and were no longer photogenic, or many just weren’t as interesting as they posed to be on the internet. So I’d travel all the way there to leave with no great shots.

This series was shot over two years in a wide variety of locations across the country, do you have any travel tips for photographers?  How did travelling affect your photographic process?

The two things I’ve come to rely on when travelling and will spare no expense on now are:

What was your most memorable experience shooting this series?

The abandoned motel we came across in Quebec. It literally looked like someone walked away in the middle of the 1960s and just locked the doors. All the bedding, curtains, lamps, beds, towels, everything was left just how it would’ve been placed when the motel was functioning. Unfortunately, the ceilings had caved-in in many of the rooms so I was unable to fully get inside to shoot it. But wow – what a surreal and creepy place. It will stay in my mind forever.

Is this series complete or will it be an ongoing project?

This series will be an ongoing project until I am no longer able to operate a camera. Motels have become a bit of an obsession for me, not to mention that half the fun is getting there on the summer road trip!

Can you share anything that you’re working on right now?

Currently I’m just focusing on my photography business – creating new work, drumming up new business while promoting Rooms for Tourists. I have a rough idea for a new series I’d like to start doing some testing on. But overall, I’m still decompressing from the last year of producing Rooms for Tourists – it was a lot of work.

I shoot primarily with a Nikon D700, Nikon FM2 or a Mamiya 6. I have always been a Nikon photographer, ever since my Dad bought me my first camera, which was a Nikon FM2. I’ve never looked back. I’m constantly amazed at the remarkable image quality I get from my D700, not to mention the sheer craftsmanship of the FM2.

My Mamiya 6 is probably my favorite camera of all time (other than a Hasselblad, which I still have yet to own.) I purchased the Mamiya 6 on eBay about 7 years ago with all 3 lenses, instead of a Hasselblad. The portability of the Mamiya 6 is what sold me. I take it travelling a lot, and like to experiment with it often like using 20 year old expired film and weird exposure times.

For the type of work I do, my Nikon Speedlight is immensely handy for bouncing light anywhere and for being a strobe in a tiny little package.  It’s a workhorse it  can provide a ton of light if needed, not to mention it’s survived being dropped many times on a variety of surfaces without even a scratch.

Do you have any advice for photographers looking to get in to the industry as a creative professional?

Be patient, and always maintain an undying passion for Photography. Don’t create work just as a job, or because you have to – take photos because you want to. Photography is a tough business, and you have to be prepared to work your butt off. It’s impossible to work that hard on something you don’t love.

I probably wouldn’t have taken time off. When my photo career in Toronto didn’t go exactly as planned, I got very discouraged, and stopped trying to “make it” for a couple years. In fact, I kind of lost my passion for photography during this time. I got out of school thinking I was going to become Annie Liebovitz overnight, but what I discovered is that photography takes a LOT of patience, practice and perseverance. Looking back, I was just discouraged, but I feel If I had’ve pushed forward my career would be further advanced now.

The best place to see what I’m up to is on my website www.heathersaitz.com or on my Flickr, which has a lot of unpublished, personal and just-for-fun work.

Heather Saitz’s series “Rooms for Tourists” will be on display starting May 1, 2013 in our Toronto location as part of the Scotiabank Contact Photography Festival –  Rooms for Tourists is a photographic exploration of the architecture, landscape & changing social meaning of the Canadian mid-century motel. Shot over two years across 5 provinces, Rooms for Tourists visits the nostalgic motel in present day, revealing the rise, fall and resurrection of a now-elusive cultural icon.

Heather’s work can also be seen across Canada at a  Vistek Photo Gallery   near you: