“In photography, creation is a quick business — an instant, a gush, a response — putting the camera up to the eye’s line of fire, snatching with that economical little box whatever it was that surprised you, catching it in midair, without tricks, without letting it get away. You make a painting at the same time that you take a photo.” – Henri Cartier-Bresson 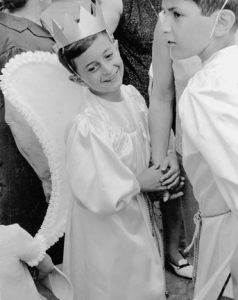 While I am primarily known these days for my landscape work, I began my career as a documentary photographer and photojournalist. This was from the mid-60’s through the late 70’s. I’ve recently returned to street shooting and am thrilled with rediscovering this side of photography.

Street Photography involves getting close to people — often very close. To do this type of shooting successfully you have to be in the scene, part of it, not a distant observer. This means shooting with wide lenses; certainly nothing longer than 50mm. With a wide-angle lens you are a participant. With a telephoto you are at best just an observer, at worst a voyeur.

Shooting this way means moving closer into most people’s personal space than they are normally used to. For this reason places like crowded streets in big cities, midways, carnivals, parades and the like are preferred venues. 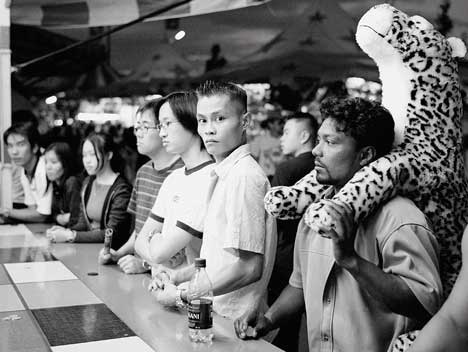 As crowding increases, people’s personal space requirement decreases. Also, the space one needs and expects is culturally dependant. In some countries people naturally stand, talk and touch each other in public to a closer degree than in others. But there are general unspoken rules. Get too close, “In your face” — as the saying goes, and people get nervous, even if they don’t know exactly why.

At a fair, a midway at a carnival, a sports event, parade, concert or public ceremony, people’s need for personal space and therefore privacy is reduced. The level of sensory stimulation is also usually high at these events, which tends to reduce the need for space. As well, in most of these situations people are having fun so they are more relaxed.

At the far extreme is a crowded elevator. We stand touching shoulders with strangers in a small space, yet taking a photograph would be an unthinkable invasion, even if it were not physically impossible to do.

Understanding these issues is important to doing effective and interesting street photography. If you poke a camera in someone’s face as they sit alone reading a book on an empty park bench you’re likely to be poked back. But you can comfortably get even closer if you’re both standing in a crowd watching children riding a Ferris wheel.

A Story in a Single Frame 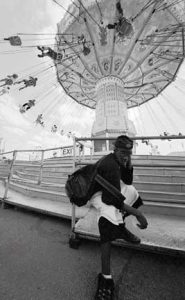 Boy & Flyers – Toronto, August 2001
Photographed with a Voigtländer Bessa-T and 12mm Heliar on Provia 100F. Converted to Duotone in Photoshop

Like the proverbial million monkeys at their typewriters, eventually random shooting will produce, if not a Shakespearean sonnet then possibly a half-way interesting photograph. But, what will it say?

Another version of this photograph taken moments earlier with a 28mm lens on a Leica M6 is shown and discussed in my article titled Variations. The photograph above is also my Featured Image for the month of August, 2001, where you can read more about how it was taken. 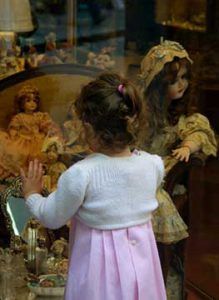 This little girl was standing at the window of a doll store in Florence, Italy. The child’s parents were standing just behind her and I was walking towards them with my wife beside me. Before lifting my camera to my eye I smiled at the parents and they smiled back. We all recognized the charm of what we were watching. After taking a few frames, we smiled at each other again and moved on. If I hadn’t been with my wife I wonder what their response would have been.

Approach this aspect of street photography with caution. A picture of a little girl sitting on her daddy’s shoulders at the Santa Claus parade is one thing. A child alone in a public place is quite another. As commented on recently to me by street photographer John Brownlow, imagine what you would think if your little girl came home one day and said, “Daddy, a man took my picture in the park today.” Needless to say, use mature judgment.

What Equipment is Best?

It would be facile to suggest that any hand-held camera can be used. My experience, as well as that of other street shooters is that a rangefinder camera is to be preferred for a number of reasons.

Because of their smaller size and bulk they look less like “serious” cameras to non-photographers. A Nikon F5 with a 70-210mm zoom says “professional photographer” in a way that a Leica M6 and 35mm lens does not.

Of course this style of shooting is hand-held, and rangefinder cameras, with their lack of a rapid-return mirror are usually capable of sharp frames at lower hand-held shutter speeds that are one to two stops slower than that possible with an SLR.

Because of the need to quickly change distance from the subject as well as perspective, having a choice of lenses is important. The best way to change lenses quickly is not to have to. This means carrying a second body and lens. The light weight and low bulk of RF cameras makes this much more pleasurable.

As for selection of lenses, I predominantly use 28mm, 35mm and 50mm focal lengths for street shooting. Nothing longer is really needed. Something wider such as a 21mm or 24mm lens or even a 12mm or 15mm can create a unique “look” though likely won’t be used too often. Lenses this wide can be awkward to use on an RF camera because they require the use of an auxiliary viewfinder. As seen in this frame though, the results can sometimes be worth the extra bother and effort.

Film is a matter of preference. Most street photographers shoot B&W film, usually ISO 400, with TMax 400 and the venerable Tri-X being favourites. I haven’t used it much yet but I’m told that the best very high-speed film is Fuji Neopan 1600. My experience shows that Fuji Provia 400F is the preferred high speed colour transparency film, and it takes pushing a full stop quite well. I have no personal experience though with the current generation of high speed colour negative films.

If you’re interested in the current state of the RF 35mm camera market have a look at my article Rangefinder Renaissance.

As in every genre of photography there are ideal tools and then there are opportunistic tools. While most street photographers would agree that an M-series Leica is probably the preferred tool for this craft, a high quality pocket camera can also nicely do the job. No, they don’t have interchangeable or high speed lenses, but a quality f/2.8 28mm or 35mm lens along with ISO 400 film can do a quite credible job.

I find that when I’m travelling my senses are heightened by being in a foreign environment, and I often see photographic opportunities in otherwise mundane places.

This moment presented itself as I was waiting for a commuter train at Clapham Junction station, just outside London. I was travelling to a lunch meeting, and photography was not foremost on my mind. But this tableau — of a uniformed school boy, lost in thought — captured my attention. A Ricoh GR1s was in my pocket and a few seconds later so was this image.

Don’t be sneaky. Don’t carry a big tecky-looking camera case. A small shoulder bag is all you need for a body and a few lenses and film. Wear simple, unpretentious clothing. Dress like the people that you’re photographing. Don’t hide your cameras. Don’t “sneak” your shots. Don’t skulk at a distance shooting with long lenses. Don’t be a voyeur, be a participant.

One technique that I use is when I see a situation evolving that could lead to a good image is to walk close-in and observe and participate. I’ll bring my camera briefly to my eye to check exposure and pre-set focus then I bring it down to hang from my wrist or neck. I don’t hide the fact that I’m doing photography. Then, when a composition starts coming together I bring the camera to my eye and start shooting. Using this technique I am ready for the best moments and no one is surprised that I’m taking their photograph.

People’s expressions are fleeting and situation’s compositional opportunities always are in a state of flux. Catching the right moment, particularly when there is more than one person in the frame, is just as difficult as a sports photographer’s job in terms of catching the moment of peak action. Keep shooting as events unfold. Shoot a lot. Don’t skimp in film. Another good reason for having a second camera body — reloading is minimized.

Finally, smile. Smile often. If someone objects to having their picture taken, don’t take it. If someone turns away, respect their privacy. Smile. Have fun.

Michael Reichmann has been both a professional photographer as well as avid amateur for more than 35 years. Born in England, he was raised and educated in Quebec. He now devotes his full-time energies to landscape photography, photographic journalism, print collecting and teaching — among other pursuits.