Editors Note: Metering for Correct Exposure | From Lastolite School of Photography was originally written by Mark Cleghorn for www.lastoliteschoolofphotography.com and has been reproduced with permission. 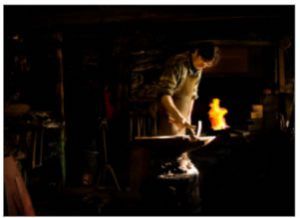 Metering can be difficult in a dramatic scene, especially when there is a domination of light or dark. Avoid auto metering modes to capture the detail you want to record, not what the camera averages.

A correct exposure is determined by a combination of the amount of light reaching the cameras sensor
through the lens (aperture) and the length of time the shutter (speed) is left open. This combination will also be effected by the sensitivity of the sensor to light, which we set via the ISO setting on camera. 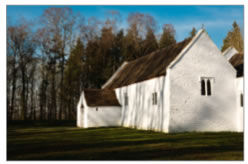 This will give detail in the highlights as well as in the shadow areas of an image with a subtle transition  through the general tonal range in a scene. An image may contain brighter or darker areas in the  photograph, however the main subject area will contain detail with little or no loss. 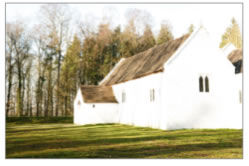 Over Exposure – Loses detail in the highlight areas. 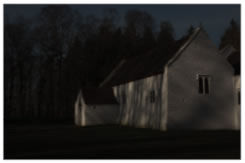 Under Exposure – Loses detail and contrast

This occurs when too little light is allowed to affect the cameras sensor, causing lost detail in the mid tone  and shadow areas. Under exposure will give either a totally black image if the setting is less than 4 stops  lower than the ambient light or an overall dark image depending on the difference from a correct exposure.
Check– ISO setting, Aperture Setting, Shutter Speed

This is the most accurate way to measure either the ambient light or flashlight on a subject when shooting weddings and portraiture as well as still life and product photography? 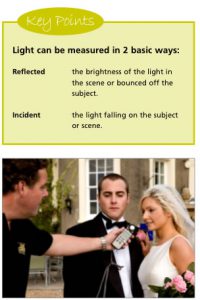 This method is usually done with a light meter. A light meter is used to measure accurately the light falling on a subject, based on a calibrated sensor in the meter itself. It gives a reading based on a tone of grey, so no guess work is involved in choosing the right tone in an image to take a reflected reading off.

To use a hand held meter first set it to either ambient or flash mode, hold it by the subject and point it back toward the light source. This will now give you a correct exposure based on a combination of your chosen ISO, as well as the aperture F-Stop and the shutter speed setting.

Even though a light meter is usually used to take an Incident light reading, they can also take a reflective  reading when used in a different mode or with different accessories, even a spot meter reading. 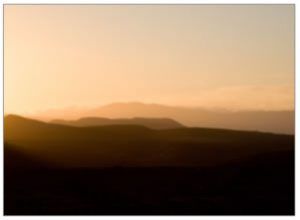 Accurate exposure can be difficult with landscape photography.

This is the most common metering as this uses the cameras built in sensor and is perfect for landscape  photography when it is impossible to take an incident reading from the subject in the distance. Instead the  reflective light is measured by accessing the light levels in the scene.

In DSLR’s the exposure is determined by the light hitting the sensor through the lens, hence the term  ‘Through The Lens’ metering (TTL)

To take an accurate reflective meter reading takes a little more skill, as you have to be able to read the  scene and decide which part of the image is going to give you the tone to record. As almost every image has highlights, mid tones and shadow areas the equation can be more confusing.