Come winter, nothing frustrates photographers more than poor exposures due to extensive amounts of snow in the scene. Here are some ways of dealing with this problem. 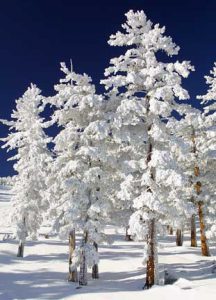 Brightly lit snow is about 1.5 – 2 stops brighter than 18% (medium) grey — which is what your hand-held or built in camera meter expects to see. Therefore, when metering a scene with large expanses of snow the meter (which doesn’t know the difference between water, grass or snow) — simply exposes it as medium grey. Ruined shot.

While we’ve all grown accustomed to the very effective matrix and multi-segment metering in contemporary cameras, not even the best of them can deal with large expanses of bright snow.

The solutions are simple.

Use a hand-held incident light meter
The translucent round ball reads the light falling upon it as if it were an 18% (average) gray subject. Just place the ball in the same light as your subject and the exposure will be spot on.

Adjust your ISO dial
If you set your meter’s or camera’s film speed dial to a 1.5 – 2 stop lower setting the camera will expose properly. (Use ISO 32 instead of 100, for example).

Use your Exposure Compensation Dial 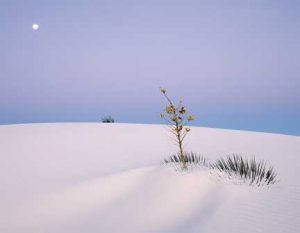 If your camera has one, adjust the setting to about 1.5 – 2 stops of overexposure.

Of course not all snow scenes are created equal so bracketing is a must for critical work. Also in many scenes such as the one above you want the snow to be a bit darker than normal, to show texture, so keep the compensation to not more than 1 or 1.5 stops.

There are situations similar to snow where this technique is also needed. For example, the sand dunes at White Sands National Monument are so white and bright that the same exposure compensation is needed there as is needed when shooting snow.

Michael Reichmann has been both a professional photographer as well as avid amateur for more than 35 years. Born in England, he was raised and educated in Quebec. He now devotes his full-time energies to landscape photography, photographic journalism, print collecting and teaching — among other pursuits.