The Light Storm 300x is the latest point-source LED from Aputure and is also the first bi-colour Bowens mount light fixture to be compatible with optical lens modifiers.

The First of Its Kind 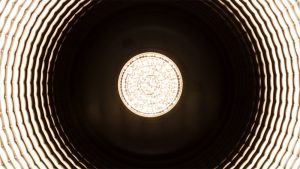 Utilizing a specially designed colour-blending optical element in front of its LED light source, it combines the bi-colour chipset into one cohesive point-source.

When used with the Fresnel 2X, the LS 300x is capable of producing over 56,000 lux at 1 meter, creating a stunningly bright light.

The 300x is the first of many Aputure lights that utilizes the expanded vari-white CCT range of 2700K-6500K, going beyond traditional bi-colour to produce light that is both warmer than typical tungsten fixtures, and cooler than conventional daylight (D55).

The 300x features a new CCT control wheel, in addition to the intensity wheel which allows you to fine-tune your CCT in +/- 50K increments.

In Constant Output mode, the CCT can be precisely changed while maintaining a consistent luminance level and a new, smoother dimming system, allows you to seamlessly shift your colour temperature in the middle of a scene.

In Max Output mode, the 300x will always maximize your output for your CCT and dimming level, with the highest output range being 4000K-5500K.

The 300x can be operated with a single battery (that supports 15A continuous discharge) providing up to half of its maximum output, or two batteries for full power. The control box also displays real time expected remaining battery life, so you’ll always know how much juice you have left.

In addition to the control wheels, the 300x can be controlled using Aputure’s 2.4G RF Remote, DMX512, or the Bluetooth Mesh Sidus Link App which allows you  to control all of your lights’ settings from nearly anywhere on set.

As with other Aputure lights, the 300x is compatible with Bowens-S Mount modifiers meaning you can change the quality of your light source in seconds. It can also be used with other industry-standard modifiers from brands like Chimera, as long as they have a Bowens mount speed ring.

With the integration of the Sidus Mesh chipset, the Light Storm 300x allows you to control up to 100 fixtures from your smartphone or tablet through the app, and because it’s a mesh network, the overall range is extended with each additional light fixture added to the mix.

The Light Storm 300x is Aputure’s latest point-source LED and is the first bi-colour Bowens mount light fixture to be compatible with optical lens modifiers. By combining the latest optical colour blending technology with Aputure’s dual-colour LED chipset, the LS 300x can utilize the Fresnel 2X and Spotlight Mount to give you unprecedented flexibility from a single fixture. With a simple turn of a dial or press of a button, you can adjust the fixture’s white light CCT output between 2700K-6500K in just seconds. And utilizing the same robust lamp head and control box design as the 300d II, this light is built to handle any filmmaking challenge.

Profoto A10: Speedlight that works with your camera or smartphone