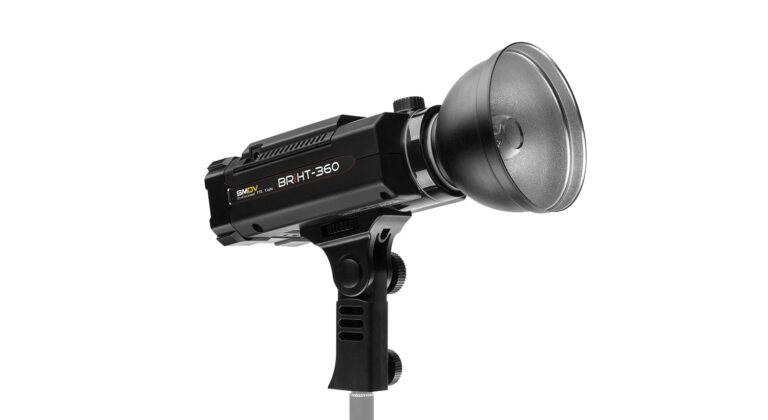 Ok, so maybe it looks a little like a radar gun, but we can assure you that the new SMDV BRiHT 360 is actually one of the most exciting & versatile flash systems we’ve seen in a long while.

The SMDV BRiHT 360 is a self-contained, 360-watts class bare-blub portable electronic flash system compatible with both Canon & Nikon systems and features not only TTL but HSS to boot!

Right off the bat, you’ll see that that the BRiHT 360 has it’s own rechargeable Lithium Ion battery located on the top of the unit itself, making the BRiHT 360 completely portable and best of all, very lightweight.

The Lithium Ion battery can provide over 300 full power flashes (it fully recharges in just over an hour) and is strong enough to easily overpower the sun when shooting in HSS mode.

Wanting to see what they could do, we carried two of the units (both heads fit into a single Tenba DNA 13 messenger bag no less) and their SMDV Speedbox A100 softboxes down to the Underpass Park in Toronto to shoot our tests.

The lights and Speedbox are extremely simple to set-up (check out the video below), and we ready to shoot our tests about 3 minutes after arriving.

Since the BRiHT 360 is compatible with both Nikon and Canon, we brought along a Canon 5D Mark IV and a Nikon D800 both kitted out with an 85mm f/1.8 lens to shoot the test shots.

We tested the lights with both cameras and can happily report that we could shoot at up to 1/8000 sec on both with no issues at all.

Practically speaking, this puts the BRiHT 360 roughly on par with the more expensive Profoto B2 (which has a half stop less power and a separate battery pack)

Whether you buy the head on its own or as a kit with a speedbox, you’ll get one Lithium Ion battery, a carrying strap, a 120 cm standard reflector, a flash tube cover and a carrying case.

The SMDV BRiHT 360 will strongly appeal to Enthusiasts as well as Wedding and Portrait photographers because of it’s true portability, and its lower price and similar features make it a great alternative to other, more expensive, portable lighting systems, especially for photographers who are just getting started with off-camera lighting systems.