With the new Podtrak P8 from Zoom, setting up your own podcasting studio has never been easier!

Zoom’s robust Podtrak P8 features everything you need to record, edit and mix your podcast, whether you’re broadcasting from the studio or live on location.

Each of the six headphone outputs are independently controllable allowing each person to adjust their own playback volumes. 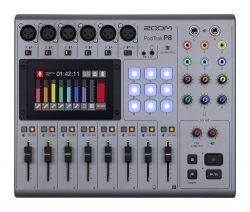 There is also a dedicated channel for recording phone calls and channel six features a USB mode allowing you to record your call-in guest sessions to a computer. Both of these options include a Mix-Minus feature designed to prevent echo and feedback for the caller.

Want to have a private aside with or prep a guest during a session? Simply press the ON AIR button to temporarily disable recording.

Audio will still be present through the headphones, but won’t be recorded, or audible through attached speakers or USB connection to a computer.

If you want to record on location, the P8 provides up to 2 hours of recording with four AA batteries, or you can connect a USB power supply for virtually unlimited use. 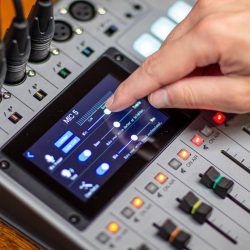 The large colour touchscreen allows you to monitor, adjust and onboard edit your broadcast seamlessly by providing access to:

The touchscreen display can also be set to any one of six languages, English, French, German, Spanish, Italian or Japanese. 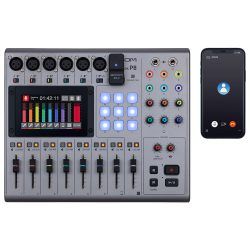 Wirelessly connect to a phone

Another nice feature is that all of the inputs, outputs, and controls are all colour-coded making it easier to identify and adjust the correct settings for each participant.

The Podtrak P8 also has the ability to wirelessly connect and record to your phone when paired with the (sold separately) Zoom BTA-2 Bluetooth Receiver.

If you want to make your podcasts sound a little more professional, the P8 gives you the ability to trigger sound effects, intro music, jingles, pre-recorded interviews and more, using the nine multi-colored sound pads.

You can choose from 13 preloaded sounds, load your own and create up to four banks of sounds for a total of 36 sound clips.

The P8 also features onboard editing of audio clips, allowing you to trim, split and fade them to produce a finished episode.

You can also transfer the track files to your computer if you prefer to do a final mix there.

This new podcast mixer-recorder has all the functions you need to record, edit and mix podcast audio with its full-colour touchscreen interface. Records up to 13 tracks simultaneously, with individual volume sliders, mute buttons and on-air indicators for each channel, plus nine assignable sound pads and 13 preloaded sounds. The Zoom PodTrak P8 is easy to use and can handle the most ambitious podcasting projects.