Canon has announced not one, but two, new APS-C sensor cameras today, the EOS M6 Mark II mirrorless and the EOS 90D DSLR.

Despite one being mirrorless and the other a more traditional DSLR, both cameras share many of the same core features including: 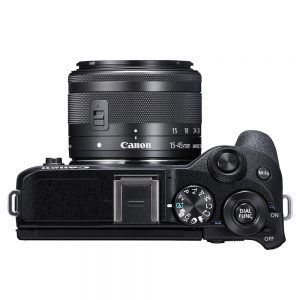 Canon says that the EOS M6 Mark II was designed to bring the “controls and functionality of a Canon EOS DSLR into a compact mirrorless camera.”

The M6 Mark II can shoot up to 14fps with AF and AE tracking but can also capture up to a blistering 30fps when the RAW Burst Mode with pre-shooting capabilities is enabled. 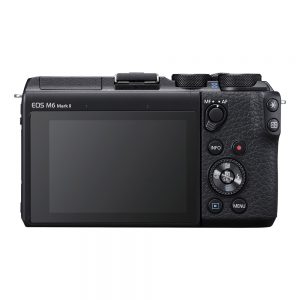 Dual Pixel AF with Face Tracking and Eye Detection mode is also available when recording 4K videos which will make the camera appealing to the vlogging crowd.

The M6 Mark II’s large, high-resolution, 3.0″ tiltable LCD monitor (180° up and 45° down) allows for quick access to control settings, focus and shutter release and features touch-and-drag AF that works in tandem with the optional EVF-DC2 electronic viewfinder allowing you to select AF positions with the touch of a finger.

With high-speed continuous shooting of up to 14 fps, plus innovative AF technology, including Touch & Drag AF** that works in tandem with an optional electronic viewfinder, Eye Detection AF* and Dual Pixel CMOS AF — all designed to help you quickly lock focus on fast-moving subjects. For the video enthusiast, the EOS M6 Mark II camera doesn’t disappoint, offering beautifully-rendered uncropped 4K 30p videos that impress. Operability is also more streamlined and advanced, with an electronic shutter that helps you silently capture images — perfect for quiet settings, such as dance recitals, school concerts or presentations. With an interchangeable lens system and its compact size, the EOS M6 Mark II is a versatile and portable option, ideal to take with you wherever you go. 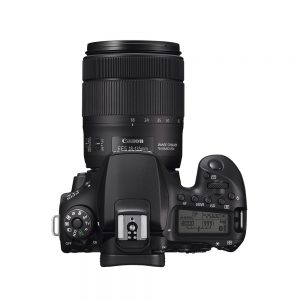 The EOS 90D DSLR features the same sensor and image processor as the EOS M6 Mark II but offers the benefits of a traditional DSLR body such as an optical viewfinder, beefier body and control placements that some photographers still prefer.

The 90D is capable of shooting up to 10fps, (an increase from the 7fps with the EOS 80D), and features a 45-point all-cross type AF system with 100% vertical and 88% horizontal viewfinder coverage and supports up to 27 points with an f/8 metering with compatible EF and EF-S lenses.

The 90D is also equipped with a new AE sensor that boasts an impressive 220,000 pixels and utilizes EOS iTR AF (Intelligent Tracking and Recognition system) that uses algorithms to quickly detect and track a subjects face even while looking through the viewfinder.

The 3.0″ vari-angle touchscreen on the back supports touch gestures for zooming, swiping through images and focusing on subjects.

Equipped with an enhanced 32.5 Megapixel CMOS (APS-C) sensor, powerful DIGIC 8 image processor and an ISO range of 100-25000 (expandable to 51200), you’ll achieve sharp, detailed images, even in low-light settings. Perfect for fast-moving subjects, the EOS 90D camera features a 45-point cross-type AF system* and EOS iTR AF (face detection) — plus high-speed continuous shooting of up to 10 fps — raising the game for wildlife and motor sports photography enthusiasts. And with stunning uncropped 4K 30p video capability, the EOS 90D documents your travels, events and other milestones in full, wide-angle view. No matter where your photography ventures take you, the EOS 90D proves to be the versatile, all-around SLR camera you didn’t know you were missing.