On the outside, with its typical Fujifilm minimalistic style, the new X-S10 mirrorless camera is beautiful to behold. Clean lines abound and there is a nice beefy grip to help ensure you keep a solid hold on the camera.

In addition adding a beefier grip, Fujifilm has made some other very fundamental design changes to the control layout, especially when compared to other X-Series cameras.

There is also a dedicated movie record button positioned on top of the grip area that when pressed, will initiate video even if the camera is in still mode. 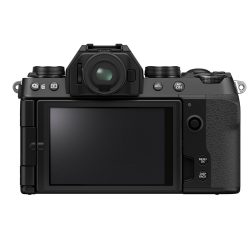 It will be interesting to see how popular these changes are with the die-hard Fujifilm fans used to the old school esthetic and layout.

Looking beyond the design changes

At it’s heart, the X-S10 uses the same 26.1 megapixel, backside illuminated, X-Trans IV CMOS sensor and X-Processor 4 combination and autofocus system as found on the X-T4.

The newly designed 5-Axis In-body Image Stabilization, which Fujifilm says is 30% smaller in volume and weight than found on other X-Series cameras, offers up to 6 stops of compensation. 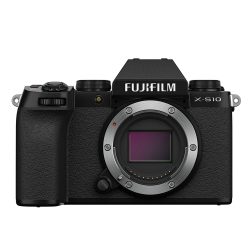 The X-S10 uses an intelligent Hybrid autofocus system with contrast and phase detection AF that is capable of focusing on subjects shrouded in darkness down as low as -7.0EV.

It also features tracking AF for moving subjects, as well as face and eye-detection.

Burst shooting up to 30fps is possible when using the electronic shutter, or up to 8fps with the mechanical shutter.

The X-S10 also includes 18 different film simulation modes in addition to an updated Auto Scene Position mode that will automatically adjust shooting settings to the given scene.

The X-S10 is no slouch when it comes to shooting video either.

It captures 4K 30p 4:2:0 8-bit footage internally to the single SD card, or 4K 30p 4:2:2 10-bit to an external recorder via the HDMI port. It is important to note however, that internal recording is limited to 30 minutes.

Other features for video include, Full HD high-speed recording at up to 240fps, F-Log, silent mode, 3.5mm jack to attach an external microphone and headphone jack that will allow you to monitor sound.

A compact mirrorless camera body that’s packed with cutting-edge technologies to bring out your best as a photographer. The portability and power of this camera will let you connect with your subjects like never before.

Printing at home: Finding the right photo editing software for you