The latest entry in Sony’s Cyber-shot RX100 series, the Mark VII, is a generous step up from previous iterations. They’ve managed to pack some serious pro-level features into this compact little camera, and it has an awful lot going for it. Like other RX100 models, this one will appeal to travellers and families in particular, and if you’re into vlogging or video in general, you’ll be pleasantly surprised by what you can do with it. 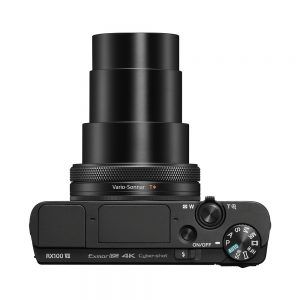 Outwardly, the Mark VII is almost identical to its predecessor. It has the same 24-200mm f/2.8-f/4.5 zoom lens and pop-up electronic viewfinder, as well as the same flip-up touchscreen and battery. But internally, you’ve now got a newly developed 20.1MP 1.0-inch stacked CMOS sensor with built-in DRAM chip – and what a difference that makes.

One standout feature brings the Mark VII closer to Sony’s flagship mirrorless a9: in terms of speed, it’s capable of capturing 20 full-res frames per second (just like the Mark VI), but now you can shoot with real-time tracking and eye autofocus, both human and animal (just like the Sony a9). With that at your fingertips, you’ll be able to lock tightly and effortlessly onto subjects as they move throughout the frame, whether you’re shooting stills or video.

And by the way, if 20 frames a second isn’t fast enough for you, the new Single Burst Shooting Drive Mode gives you an astonishing 90 fps with a single push of the shutter. 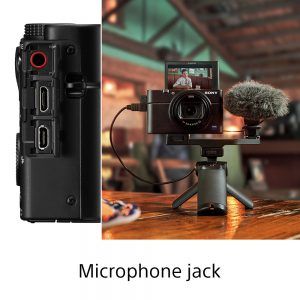 Another bonus: Active Steadyshot stabilization is now available for 4K video capture, for smoother handheld video, even when you’re walking. You’ll also find a new 3.5mm microphone jack near the top on the right side of the camera. When facing forward, the flip-up screen becomes an added blessing for bloggers, but no matter what you plan to shoot with this or how you plan to shoot it, the Sony RX100 Mark VII puts a whole lot of power into a pleasantly pocketable camera.