Introduction… What is a DSLR camera? 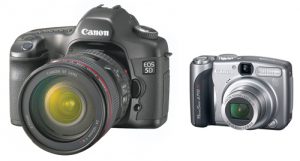 One of the major advantages of buying a DSLR is its ability to let you choose and change different lenses. From wide angle to telephoto, you can customize your angle of view with a wide variety of lenses available, instead of shooting with the single multi-purpose lens found on a point and shoot. In addition to quality differences, DSLRs offer a number of adjustable functions like aperture, shutter speed, and white balance, each capable of  full manual control.

Sensor… How does a sensor capture an image?

The sensor on a digital camera replaces film in the old models, but the principle is similar. Sensors, like film, are sensitive to light. Once the shutter is pressed, they record an image digitally. The size and type of light sensor are significant. It’s clear there’s an obvious physical size difference between a point and shoot camera and a DSLR. This is predominately due to size of the sensor contained in the camera. The sensors found in DLSR models are much larger than those within point and shoot cameras, thus producing clearer images with less distortion and noise.

In today’s market, sensors are available in two types: CCD and CMOS. CCD, or Charged-Couple Device, is used in almost all point and shoot cameras and in numerous digital SLR cameras. CCD sensors produce high quality images, although cameras equipped with this sensor tend to be more costly and consume more power than other types.

A CMOS sensor is larger than a CCD sensor so its surface is capable of capturing more light. As a result, CMOS sensors are more sensitive and produce images higher in quality compared to CCD sensors. CMOS sensors are easier and less costly to manufacture and use less power than CCDs. Because of their increased size, cameras using this type of sensor tend to be bulkier.

There has been some debate concerning the relative strengths of CCD versus CMOS. In practice, neither is “better”; each type works effectively and should be evaluated on its own merits. 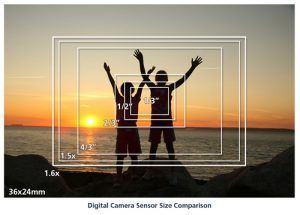 The sensor size affects many factors in your images and the functions of your camera body. It has a major impact on the quality of your image, how your lens functions, and how it performs in low light conditions.

There are three basic size categories for sensors: Four Thirds, APS, and Full Film Format. As noted in the chart below, the smaller sensors are used in point and shoot cameras while the larger ones are found in DSLR models.

Four Thirds sensors have become a standard for Olympus and Kodak at a size of 13.5mm by 18mm, while APS sensors are close to that of the original APS film size. Most DSLR cameras fall into the APS size range (14mm by 21mm to 16mm by 24mm), often described as 1.5x and 1.6x factors.

Sensors that are the same size as 35mm film format are also called full-frame sensors. This full frame sensor allows you to use lenses without the complication of focal length magnification factors and produce the highest quality images in DSLR cameras. The sensor size is a true 24mm by 36mm, just like  a frame of 35mm film.

After all this talk of sensor sizes, as a major component of your digital camera choice, you may wonder how resolution and the megapixels affect your images. It’s a matter of size. Larger sensors have larger pixels which mean they’re more sensitive to light and capable of producing images with more detail. For example, take an 8MP point and shoot camera versus an 8MP DSLR camera. Each has identical megapixel values (the same number of pixels) but because the DSLR has a larger sensor, the pixels are larger. These larger pixels are able to gather more light, reducing the chance of “noise” in the image due to signal distortion reduction.

Another advantage of this large sensor size is the ability to perform well under low light situations using a high ISO setting. The size and number of pixels in your camera govern how large you can print your image without losing quality. Professional photographers like the option of printing large images and cropping them without losing quality.

As described in our Lens Buying Guide, the size of a DSLR’s sensor affects the viewing angle of the lens. Lenses are described by their focal length and aperture size in a standard 35mm format. Since most DSLRs use sensors that are smaller than this 35mm format, the angle of view is magnified.

Let’s explain this further. Compare a standard 35mm film camera equipped with a 50mm lens to a digital SLR with a sensor size of 22.5 x 15.0 mm. The DSLR’s image sensor is smaller than the full frame 35mm camera’s film area by a focal length multiplier of 1.6x. This means that the 50mm lens translates into a short telephoto lens of 80mm (50mm x 1.6 = 80mm) when used on this particular DSLR.

In addition, the quality of the image can be enhanced. Most lenses are sharpest near the center and tend to become less sharp around the edges. Since smaller sensors crop the frame’s angle of view, the result is a sharper, higher quality picture using more economical lenses.

LCD Screen… Where did the live preview go? 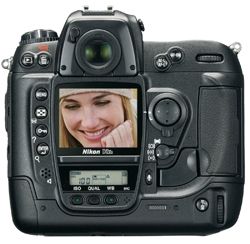 If you’re familiar with point and shoots, chances are you use the LCD screen more often then the viewfinder. This option is not available to DSLR cameras due to the construction of the single lens reflex (although Olympus has developed a new technology to introduce live previews in its cameras). However, DSLR LCD screens can contain considerable information about the image.. Reviewing your image on the LCD screen can also reveal such camera settings as histogram, white balance, focal length, aperture, shutter speed and more.

Many of the advanced menu options can also be accessed on the LCD screen, allowing you to make finer adjustments and overrides.

Lens Mount… Are all lenses compatible with every digital camera?

A digital SLR camera is equipped with a lens mount that allows you to attach a lens. This interchange function lets you change lenses depending on your shooting requirements and offers much greater flexibility than point and shoots cameras will allow.

The lens mount also acts as a connector, facilitating communication between the camera body and lens. Autofocus and aperture size are controlled by the body’s electronics while their limitations are determined by the lens itself. Because manufacturers tend to use the same mount when developing new technologies in their product lines, it is often possible to use an older model lens on a new DSLR body. For example, some Nikon lenses of thirty years vintage and more will fit on a modern Nikon DSLR and operate well, even if limited to manual focus and exposure only.

Third party lens manufacturers like Tamron, have developed their own lines of lenses that are digital camera specific. They come equipped with the camera mounts for major camera companies like Nikon and Canon.