Lens Quality …how does the engineering affect the price?

The wide range of lens prices can be quite baffling considering the range runs from $120 to over $10,000! Clearly, there is quite a difference in the engineering and quality of each lens. The more restrictive the zoom lens, the more expensive a lens can be while the larger the range, the less expensive it becomes. Why is this so?

There are two major factors that come into play that determines the price of a lens; focal length and aperture. 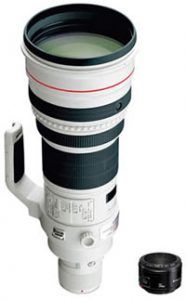 The difference in size is astronomical between this Canon Telephoto 600mm and the Canon standard 50mm lens!

The focal length determines the angle of view, magnification, or perspective of your image, as well as the physical size of the lens itself. A 50mm focal length is the most common and easiest to make. For a 35mm full frame camera, it is the standard focal length, meaning it is closest to the view of the human eye. Lenses that are manufactured to be drastically smaller or larger than this 50mm mark tends to be more costly and more complex in design.

In simple terms, the longer the focal length the more narrow the angle of view becomes, bringing distant objects and subjects closer. Focal lengths shorter than 50mm will give you a wider field of view, which is especially valuable in small spaces or when your subjects are very close to you.

Quick Lesson on Film versus Digital

If the 35mm camera’s 50mm normal lens were somehow placed on the smaller compact camera, the angle of view would change drastically. Instead of the 50mm lens being a “normal” focal length, it would now transform into the 35mm equivalent of a 200mm telephoto lens. That’s because the angle of view that’s captured in the end is determined by the focal length of the lens and the size of the image sensor of the camera it’s on.

With the advanced technology of lenses, the capability of using some film lenses on digital and vice versa is possible. Not all lenses are swappable, some are designed for digital cameras only and some are specific to film.

In cases where you can switch your lens, you must keep in mind the image sensor of your cameras. If your favourite film camera has a different image sensor size then your brand new digital SLR, chances are the angle of view and/or magnification will change also.

Keep in mind that most DSLRs are smaller than 35mm film cameras, and that means lenses will automatically transform into a longer focal length. There are several DSLR-specific lenses that are engineered to combat the expanded focal length, allowing for better wide angle capabilities. 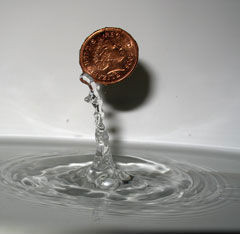 The next major cost is related to the size of the aperture. The smaller the f-stop number, the larger the lens size. Two lenses with the same focal length can vary greatly in price, depending on the aperture size of each lens.

Lenses with large apertures (small f-stop numbers like f/2.8 for example) have bigger barrels and are usually heavier and more expensive. Their advantage is that the larger apertures let in more light, which allows for dim light photography with a faster shutter speed or a lower ISO.

With the increasing sophistication of lens technology, there are other elements besides aperture size that affect its price. Features such as ED (extra low dispersion) offer superior sharpness and corrects chromatic aberration. Some lenses include special coatings that reduce reflections, flaring, ghosting and other aberrations. Complex designs may include smoother auto focusing and a more compact construction. All of these factors can contribute to the price of a higher end lens.