Atomos has announced the Ninja V Pro Kit which bundles everything you need to capture and monitor RAW footage via HDMI and SDI in one convenient package.

Prior to this, the Ninja V could only natively capture RAW footage via HDMI, if you wanted to capture it over SDI, you needed to purchase the AtomX SDI module separately.

It also easily expands the range of cameras that the Ninja V can be used with including: 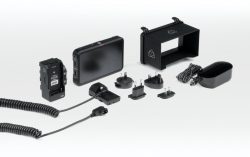 Atomos Ninja V Pro Kit – What You Get

The Ninja V Pro Kit has been designed to bridge the gap between compact cinema and mirrorless cameras that can output RAW via HDMI or SDI. Pro Kit also pushes these cameras’ limits, recording up to 12-bit RAW externally on the Ninja’s onboard SSD. Additionally, Pro Kit provides the ability to cross covert signals providing a versatile solution for monitoring, play out and review.

Record up to 4Kp60 10-bit HDR video direct from your camera’s sensor, over HDMI 2.0. Store edit-ready ProRes or DNxHR on affordable SSD drives and bypass your cameras internal compression and record time limits. A tiny 1TB AtomX SSDmini will give you 2.5 hrs of 4K recording.