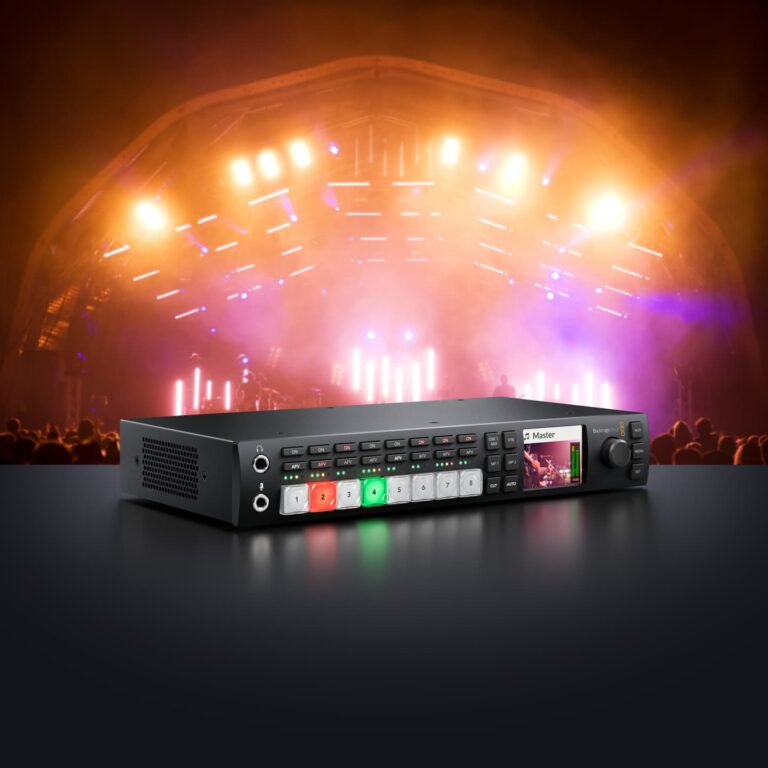 The new ATEM Television Studio HD is a professional quality live production switcher designed for both broadcast users and AV professionals based on the Teranex Mini converters.

The new ATEM features 4 SDI and 4 HDMI inputs allowing users to connect up to 8 simultaneous sources and supports all SD and HD formats up to 1080p60.

You also get high-end broadcast features, such as re-sync on all inputs, meaning you’ll always get clean switching regardless of camera type (professional or consumer grade).

Other new features include routable, multi-view output, allowing you to view all  of your sources, including audio meters and the built-in control panel giving you the ability to live switch right from the front panel.

There is also a built-in DVE, built in talkback headset connections, 4 program outputs for cameras that have mix minus support, flash based media store, an independent aux output and analogue audio inputs on XLR connectors.

The feature packed HyperDeck Studio Mini is a scaled down (in size only) broadcast deck that’s roughly a third of the size of Blackmagic’s current HyperDeck models. But as the saying goes, “good things come in small packages” and the Studio Mini is more than capable of clip playback, recording masters for live production and handling  digital signage.

Small and mighty, the Studio Mini is still a true professional deck and will record and play back broadcast quality 10-bit video as ProRes files on SD and UHS-II cards.

The HyperDeck Studio Mini can be controlled by BlackMagic ATEM switchers, making it the perfect media player for running clips, animations and stingers. You can also mount the ATEM Television Studio HD and HyperDeck Studio Mini into a space saving single rack unit to create a live production studio and mastering recorder setup.

“The Blackmagic Web Presenter makes any SDI or HDMI video source appear as a USB webcam for higher quality web streaming using software such as Skype or streaming platforms such as YouTube Live, Facebook Live, Twitch.tv, Periscope and more.”

Blackmagic Web Presenter allows you to use open source software tools such as Open Broadcaster and XSplit Broadcaster to open up global live streams from any location on any platform including, Windows, Mac, Linux and Chromebook.

The Web Presenter can also make broadcast quality Skype calls, perfect for conducting live interviews from any location, even with a poor  internet connection.

Low bandwidth? No problem! Web Presenter will automatically lower the frame rate for you if your software requests it.