By VistekOctober 15, 2020No Comments5 Mins Read

DJI has updated and rebranded (dropping Ronin from the name) two of it’s most popular handheld gimbals, so lets meet the newest versions of the Ronin S and Ronin SC, the DJI RS 2 and RSC 2 stabilizers.

Designed to work with larger DSLR and compact cinema cameras, the RS 2 is slightly smaller and lighter than the previous version, yet is able to handle larger payloads of up to 4.5 kg / 10 lbs.

The lighter weight is attributed to the incorporation of carbon fibre into vital structural components of the unit. 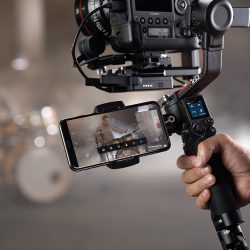 This has had the benefit of not only reducing the weight by 2.3 kg / 5.04 lbs, but also strengthening the unit where it’s most needed.

Even with the increased payload capacity, DJI says the RS 2 will run for up to 12 hours on a single battery charge. If you do drain the battery, there is a new quick-charge function incorporated directly into the handle providing up to 2 additional hours of battery life with just a 15 minute charge.

The Titan Stabilization Algorithm has also been newly optimized, further reducing the need for manual operator input while compensating for user movement and optimizing the gimbal tilt and angle.

There is also a new SuperSmooth mode providing another level of camera stability, especially when using longer focal length lenses of up to 100mm. 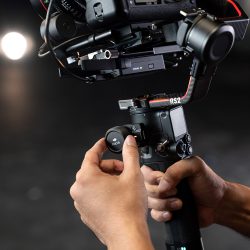 Axis locks on the gimbal allow for easier transport and balancing and the dual-layer camera mounting plate is compatible with both the Acra-Swiss and Manfrotto standards.

There is also a fine-tuning balance knob to provide a greater level of precision when balancing the payload.

Rounding out the features, the 1.4″ colour touchscreen displays camera data, gimbal settings or a live feed from the camera. It can also initiate key functions such as ActiveTrack and intelligent shooting modes.

The built-in front dial above the trigger allows for more precise focus control and complements a DJI Focus Wheel mounted on the RSA port to create two-channel focus and zoom.

Finally, the RS 2 can be attached to and used with other systems such as jibs, car attachments, and sliders and the two RSA ports double as NATO ports other accessories/attachments such as grips or a remote controller to be mounted.

Meet DJI RS 2, an unparalleled solution for dynamic cinematography. Industry-leading camera stabilization is more accessible than ever thanks to a 4.5kg tested payload, a 1.4-inch full-color touchscreen, and a carbon fiber construction that puts RS 2 at just 1.3 kg. With countless creative features, extensive camera compatibility, and a rich ecosystem of accessories, get ready to turn your visual possibilities into cinematic reality.

The RSC 2, is the smaller of the two gimbals and features a maximum payload of 3 kg / 6.6 lbs meaning it can handle most mirrorless cameras with ease.

Like the larger RS 2, DJI has trimmed the weight of the RSC 2 down to 1.2 kg / 2.65 lbs (35% lighter than the previous version) while increasing the payload capacity.

As with the RS 2, the built-in battery offers up to 12 hours of run time and features the same quick-charge function that adds and extra 2 hours from a 15 minute charge.

The newly optimized Titan Stabilization Algorithm further reduces the need for manual operator input while compensating for user movement and optimizing the gimbal tilt and angle.

Axis locks on the gimbal allow for easier transport and balancing and the dual-layer camera mounting plate is compatible with both the Acra-Swiss and Manfrotto standards.

There also a 1″ OLED touchscreen display that shows camera data and allows operators to adjust settings.

Creative Modes for RS 2 and RSC 2

Both gimbals feature DJI’s most popular creative modes, and introduce a new soon to be favourite mode called Time Tunnel.

Introducing DJI RSC 2, a foldable and highly versatile stabilizer for mirrorless and DSLR cameras and the successor to Ronin SC. At just 1.2 kg, this compact gimbal features a 1-inch OLED screen, Titan Stabilization, and handles tested payloads of up to 3 kg. Extensive camera compatibility, countless creative features, and an ecosystem of powerful accessories are now in the palm of your hand. With DJI RSC 2, filmmaking unfolds.