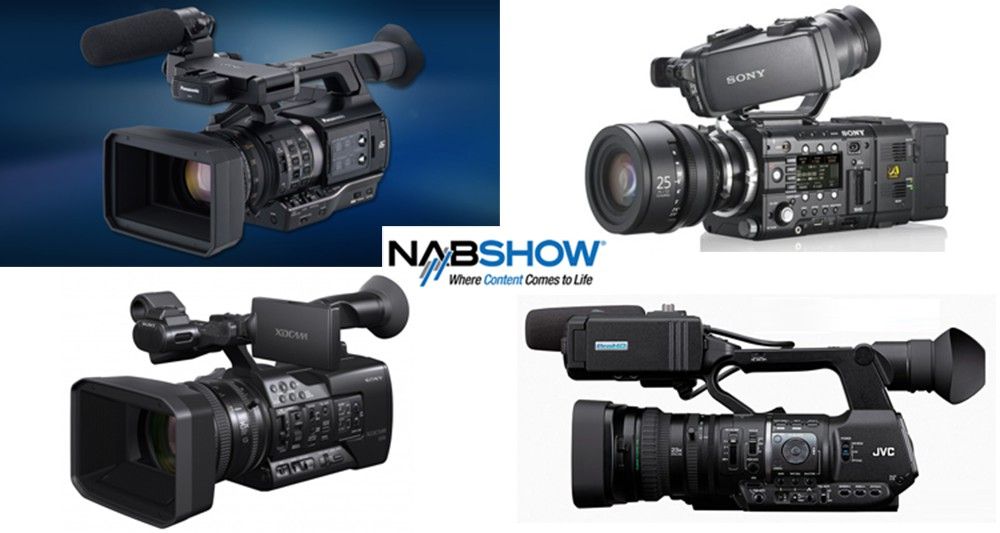 NAB has come and gone and while we were there to deliver news on some of the great new tech you’ll be seeing over the coming months, there was way, way more stuff. With that in mind, here are 4 more products from Sony, JVC and Panasonic that are sure to make a huge splash with any level of video professional.

The AJ-PX270 covers both low-bit rate and high-bit rate recording thanks to its inherent support of the AVC-ULTRA codec family. The AVC-LongG25 enables extended 1920 x 1080 10 bit 4:2:2 broadcast-quality recording (four times longer than AVC-Intra100). The AJ-PX270 also supports DV, DVCPRO, DVCPRO50 as standard for SD recording and DVCPRO HD, AVC-Intra 50, AVC-Intra 100 along with the new AVC-LongG6, G12, G25 and G50 as standard for HD recoding. For even higher quality recording, the AJ-PX270 supports the visually lossless AVC-Intra 200 codec, as an option for master quality all in one compact handheld camera.

Two microP2 card slots enable cost-effective operation. With the same reliability as the P2 card, the microP2 cards can be used without an adapter for either relay recording, when one card is full the AJ-PX270 seamlessly switches to the second card to continue recording; or simultaneous recording, where the same codec is recorded on to both cards at the same time for backup use. The microP2 slots can be used with standard SD cards for even greater efficiency when recording*6 codec’s with 50Mbps or less. A single P2 slot is also provided for integration with existing P2 workflows.

Wide Connectivity Functions for Easy Sharing in the Field

Camera connectivity is becoming increasingly important as the need for an ever faster workflow grows. The AJ-PX270 features a wired and wireless LAN (via an optional, AG-WM30 Wireless dongle) that supports the existing Panasonic network functions such as remote proxy viewing, metadata viewing and amendment, and live uplink*4 and playlist*4 solutions. Further expansion of the AJ-PX270 network workflow is planned, which will include connection over a mobile 3G/4G/LTE network. Thanks to these network features, users of the AJ-PX270 can easily uplink low-bit rate proxy*3 data and full quality broadcast content. The handheld camera’s network function makes the production workflow more efficient and accelerates the broadcast workflow from shooting to on-air.

Simultaneous RAW and onboard camera SxS recording provides a coordinated “off-line, on-line” workflow with simultaneous recording to internal SxS cards and the optional AXS-R5 RAW recorder. For seamless conforming in post, you get matching time code, start frame, stop frame, and file names.
The F55 is equipped with Sony’s large diameter, robust, FZ-mount which is compatible with virtually all 35mm DSLR, and Cine lenses with simple inexpensive lens adapters. It ships with a PL-mount compatible with Cooke/i and Arri LDS.
The F5/F55 excellent camera ergonomics enable comfortably shooting for long periods of time. The camera head, viewfinder and shoulder mount can be adjusted to fit any shooter and optimized for different lens configurations. Their clean, flexible architecture enables shooting in many configurations.

With the upgrade, the camera is also compatible with JVC’s Professional Streaming Services, including the new ProHD Broadcaster server powered by Zixi that provides reliable live content delivery to a variety of hardware decoders, CDNs, and the web. Other upgrades include large file size support with SDXC media cards and .MOV clip import capability for Mac OSX. Improved file transfers use RTSP/RTP protocol and can be controlled through a standard web browser.

“The virtually lossless 50Mbps XHQ 60p recording mode is commonly found in DSLRs, and we’re pleased to add it to our 600 Series cameras,” said Gustav Emrich, European product manager. “The Advanced Streaming Technology upgrade to the GY-HM650 is very valuable because it makes the camera compatible with our new ProHD Broadcaster server powered by Zixi, which will help news organisations manage and distribute live signals from their JVC cameras in the field.”